US elections: Biden closes in on presidency, takes lead in Georgia, Pennsylvania 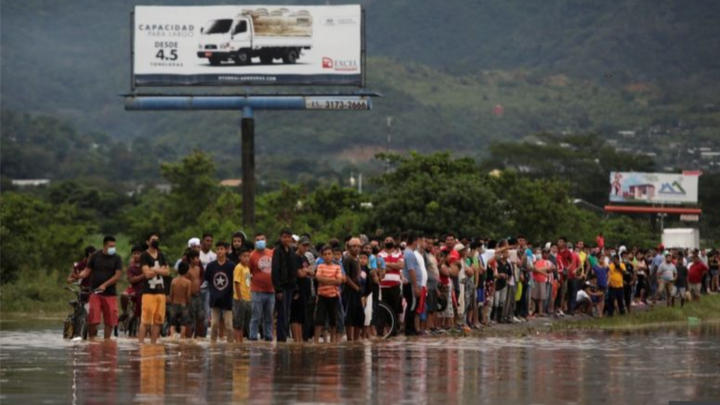 By Aaron Humes: Former Category Four Hurricane Eta, churning east-northeast of Belize City at the moment, has killed up to 70 people across Central America, says Reuters news agency by way of the BBC.

This includes at least 50 killed by landslides in Guatemala; two men buried in a mine in the north coast of Nicaragua where the storm made landfall; and a 13-year-old girl in the city of San Pedro Sula, Honduras, when the wall of her home collapsed onto the bed where she slept.

President of Guatemala, Alejandro Giammattei, says a single town saw a hillside collapse, burying 20 houses under thick mud. A month’s worth of rain had fallen in less than half a day, and ongoing heavy rainfall has kept rescuers from reaching some of the worst affected areas; they have had to make a go of it on foot.

In Nicaragua, tens of thousands of people were evacuated to shelters before the hurricane struck.

The government said around 500 Hondurans were rescued from their roofs on Thursday as water levels kept rising, while many more were likely still stranded, according to Reuters.

Photos from storm-hit regions in Honduras and Guatemala showed people wading through flooded streets, while houses and cars were near submerged by floodwaters.

Eta first hit Nicaragua as a Category Four hurricane with winds of 140 mph and torrential rains. It then weakened into a tropical depression as it moved into neighboring Honduras and later Guatemala.

Belize has seen severe flooding especially in the Cayo, Stann Creek, Toledo and parts of Belize District, while all rivers continue to steadily rise.

As of 9 a.m., Eta is 80 miles east-northeast of Belize City, moving north-northeast. But the U.S. National Hurricane Center said Eta is still causing heavy rains and life-threatening flooding over parts of Central America.

The storm, the 28th named in a record-breaking season, is expected to regain strength this weekend as it moves north-east towards Cuba and Florida.