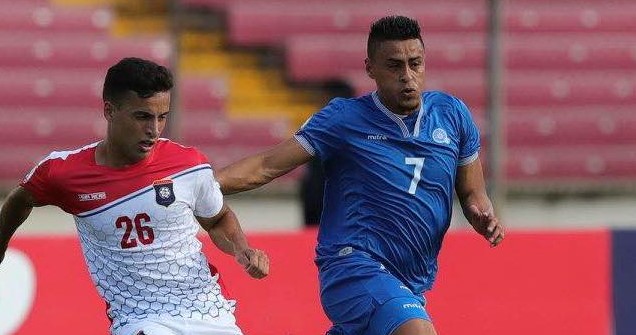 By Ruben Morales Iglesias, Belize City: Ten foreign-based players have been called to duty by The National Football Team of Belize. Sergeant Mike Atkinson of the United Kingdom Armed Forces is one of them.

Like the others, he is getting ready for the long flight which will bring him here to join the squad.

The National Team is already training in a bubble at the FFB headquarters in Belmopan since Monday, February 22, 2021, preparing for the 2022 Qatar World Cup qualifiers which kick-off away against Haiti on March 25 and against Turks and Caicos on March 30 at the Dominican Republic.

Born in England, Atkinson qualified to play for Belize because his mother is Belizean. He has worn the Red and Blue since January 2018, having been called to join the team in December 2017. Since playing at the Central American Cup in Panama in 2018, he’s made eight appearances for Belize. The UK Royal Air Forces’ pilot is now looking forward to his ninth cap.

He said: “I made my debut there against Costa Rica. I played a couple of games against El Salvador, Nicaragua and Honduras, as well,” he said to the UK Forces News,

“From that point on, it sort of solidified my place in the team for the upcoming qualifiers which would be like the CONCACAF Nations League.”

Mike has also played for Belize against Montserrat, Puerto Rico, Barbados, and Bahamas.

Like most Belize players, Atkinson has been inactive as the UK Forces championship has been on hold due to COVID-19.

According to the UK Forces News, Atkinson is rather hopeful of doing well against our opponents in the WC qualifiers.

“The group we are in, we’ve got Nicaragua, Haiti, Turks and Caicos and St Lucia. There’s games there which are definitely winnable,” Atkinson said to Forces News. “Even if we didn’t qualify, it’s still going to put us in good stead for other competitions. It’s probably just better to just be back playing as a team because we did have quite a few older players who have now moved on.”

“The new players are coming through and it’s sort of time to rebuild and go through a process with that new team that will hopefully take us in the next Nations League to eventually go to the Gold Cup in the United States.”

“It’s probably our highest target but you never know with the World Cup.”

Atkinson, who is an Air Force player is a member of the UKAF team which plays in UK’s Kentish Cup. He explained that playing in Belize is somewhat different.

“I think for UKAF, the intensity and stuff is really up there,” Atkinson said. “For my game, I do have to adapt it slightly just purely playing 30-degree heat (86F) which, again, is pretty difficult.

“As far as methods of playing and stuff like that, you are just following the manager’s direction. It’s a different formation that I play in Belize than I play in the UK. The intensity is still there. It’s just obviously a lot warmer, [so] I have to sort of adapt and make sure I’m in decent condition before I go out there.”

Since he has not been playing, Atkinson, like the other Belizean players who have been inactive, has been exercising on his own following guidelines and exercises set by the National Team’s technical staff led by head coach Dale Pelayo.

He should be joining the team shortly said the FFB.