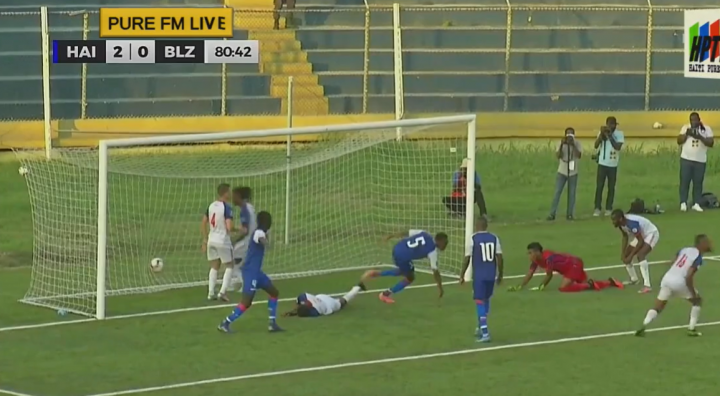 By Rubén Morales Iglesias: Haiti controlled the ebb and flow of the match at the Stade Sylvio Cator in Port-au-Prince.

The home squad had quite a number of opportunities particularly in the first 30 minutes but was very ineffective.

Haiti had a good break in the 19th minute off a corner kick on a header by Steeven Guerrier, but West was able to clear.

In the 23rd, Angelo Cappello crossed the ball on the left to Carlos Bernárdez who could not connect.

West stopped another shot up in the air in the 24th. Woodrow was fouled in the process, fell hard but recovered.

Right after that, Steeven Séance lobbed the ball into the box from right to left but Guerrier headed over the crossbar.

Haiti had Belize under siege forcing captain Deon McCaulay to play deep trying to stem the tide instead of being upfront.

Belize came up with a second attack in 28th, but Deon couldn’t connect well. Up to that point, our team seemed very dependent on what Cappello could generate off the left flank, but with McCaulay doing defensive duties it was hard to move up collectively.

After the half-hour, the game lost some intensity though Haiti had a couple more breaks, Belize was able to hold the 0-0 up to the end of the half.

Ian Gaynair got a yellow card in the 36th minute.

However, Haiti came back strong and opened the score in the 50th when Ricardo Adé scored a header off a corner kick. Ade ran up into the box behind the defenders and headed down to the right corner beating West for Haiti to take the lead 1-0.

Belize made five substitutions and appeared to have stemmed the Haitian attacks, but another set-piece off a corner kick in the 80th minute, and Haiti put the game out of reach. After Deshawon Nembhard was attended on the field from a knock to the head, the Haitians got the corner kick that produced their second goal. The ball came into the box, bounced off Séance, McCaulay tried to clear, couldn’t make contact and the ball trickled in for the 2-0 score.

Collin Westby collected a yellow card in the 89th minute.

The Belize Men’s National Team now prepares to fly to Santo Domingo, Dominican Republic, tomorrow for their second game next week Tuesday against the Turks and Caicos Islands.