St. Vincent volcano’s sulphur dioxide reaches as far as India, no reports that it would be a threat to Belize 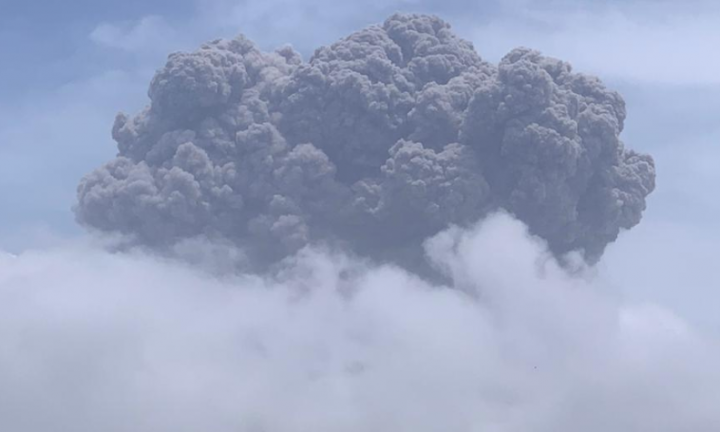 By Rubén Morales Iglesias: Sulphur dioxide from St. Vincent’s La Soufrière volcano has reached as far as India, according to the World Meteorological Organization but there are no reports that it would be a threat to Belize.

A report circulating in social media said that a combination of Sahara dust and sulphur dioxide from the eruption of the volcano La Soufrière was approaching Venezuela, Colombia, Dominican Republic, Haiti, Jamaica, Cuba and South Florida as well as Central America.

Chief Meteorologist Ronald Gordon said to Breaking Belize News that the National Meteorological Service of Belize popularly known as the Belize Weather Bureau has “not received any sort of indication from our partner institutions, regionally and internationally, whether there is a significant threat to Belize at this time.”

Gordon said the National Meteorological Service of Belize monitors the Saharan dust and volcanic ashes but not sulphur dioxide.

“We have satellite imagery that we do monitor [the Saharan dust] with and we know that at this time of the year we start to see the dust coming off Africa and reaching our area; it intensifies during the summer months. It typically peaks around July, the early parts of summer each year,” Gordon said.

“The volcanic ash itself, we do monitor that. We have been monitoring it over the past weeks since the [St Vincent] volcano erupted, and our observation shows that most of it went to the East towards Barbados and neighbouring islands.”

As to the Pacaya volcano in Guatemala, Gordon said it didn’t affect Belize.

“It did not spread as much. We didn’t see significant ash in our area from the recent eruption,” he said.

The chief meteorologist said that Belize’s meteorological service does not monitor sulphur dioxide.

“At the Met Service we do not monitor sulphur dioxide as such, we monitor anything related to weather and climate. When it comes to volcanos and volcanic eruptions, we don’t have volcanologists here at the department. We don’t have the instruments here, if any, to monitor,” Gordon said.

However, the National Meteorological Service of Belize is part of an international network and would be advised by the World Meteorological Organization, the United States National Oceanographic and Atmospheric Administration (NOAA) and the Caribbean Institute for Meteorology and Hydrology to name a few should there be a threat to Belize.

The United States Geological Survey says that “When SO2 is injected into the atmosphere, it quickly forms potentially hazardous sulfate areosols. They can cause respiratory problems to people downwind of a volcanic plume (e.g VOG—volcanic smog). If injected into the upper atmosphere (stratosphere), they can cool the climate for years by reflecting incident sunlight back to space.”

News784 in St Vincent said the sulphur dioxide (SO2) emissions from La Soufrière caused “fear of increased pollution levels in the northern parts of the country and acid rain. Sulphur dioxide reacts with water to form sulphuric acid which can come down with rainfall.”

La Soufrière started erupting on April 9 after being dormant since 1979.

NASA’s Earth Observatory website said that “Of the 45 currently erupting volcanoes on Earth, La Soufrière is among those that worry volcanologists the most,” because of its “explosive and erratic eruption style”.

News784 reported that NASA scientists say that smaller eruptions outnumber the huge eruptions by far and can have a greater cumulative impact.