Budget passes to Senate after P.M. hits back at “hot air” Opposition 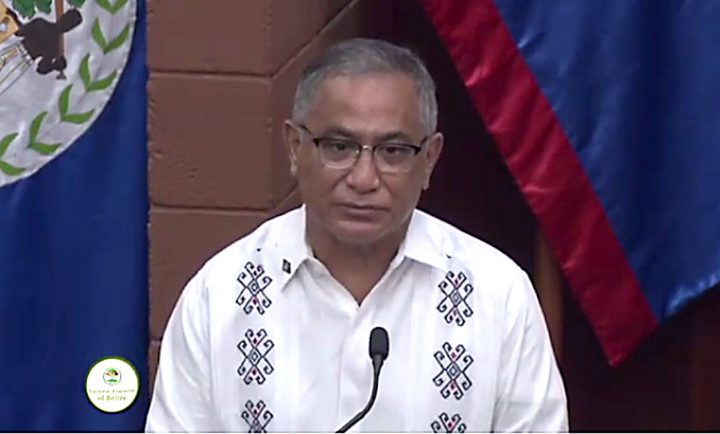 By Aaron Humes: Around news time Friday, Prime Minister John Briceño rose to close the debate on the General Revenue and Appropriation Bill, 2021-2022.

Buoyed by a veto-proof supermajority, he mocked Leader of the Opposition Patrick Faber as a “caretaker,” saying his colleagues to his right and some outside are ready to “plunge their knives into his political heart” when the United Democratic Party (UDP) hosts its next leadership convention. Neither, he said, will coy attacks on his former leader, Dean Barrow, absolve him; either he names names or takes the blame himself, he said.

The UDP, Briceno said, left terrible damage in their wake – millions borrowed without much to show, such that every Belizean now personally owes more than $10,000; high unemployment, reckless spending, frenzied land and asset grabbing. “Those ‘situations of the past are now determining our present and our future. Those may be situations of the past for you and your few party hacks, but they are painful shackles of the present for the 420 thousand Belizeans left to grapple with your mess,” he charged.

And while it is not for lack of trying, the Prime Minister said, there has been no massive sell-off of assets, nor buying of vehicles. The Government has bought just five vehicles for Ministers and 13 overall for various departments and most others are using their personal vehicles; sold just two handguns at auction, and none of the drug planes confiscated by authorities have sold despite interest.

Turning to the trade unions, Prime Minister Briceño noted the change in tone from discussion of salary adjustments to good governance reform and signaled that after commitment to the unions to do so, the Government will introduce legislation on whistle-blowers, unjust enrichment, and asset recovery as well as unexplained wealth orders and lifestyle audits in the next month.

Members have been named for a political reform commission, the P.M. further announced, which will be broad-based and resourced to work in a consultative and transformative manner. To the unions, he said, “We are on the same page when it comes to reform and good governance.” A new unit in the Ministry of Finance will go after unpaid taxes and the public officers will lead the way – and it will help the recovery of salaries and increments, he pointed out. “Industrial action by public officers will not help tax collection,” he asserted.

The Budget is “tough…but absolutely necessary,” he lamented, adding that this was not the Government showing who is boss, nor is salaries and wages the only thing being cut – it amounts to 20 percent compared to 80 percent of goods and services and other expenses. With 60 thousand already jobless, a further cut of 3,000 as suggested by the International Monetary Fund (IMF) would exacerbate the problem; but the alternative is running out of foreign currency and not being able to pay for imports.

With a rousing close urging everybody to build unity and “build Belize better and together we can and God willing, we will,” the House passed the Budget by a majority.

The Senate will consider the Budget on Wednesday, April 28, where the margin for error is smaller as the social partners may join with the Opposition to at least delay the Budget by three months. However, there is a reported split in the business community represented by Senator Kevin Herrera that may prove to be the deciding factor.