Belize Weather: Cool down coming after another hot day today 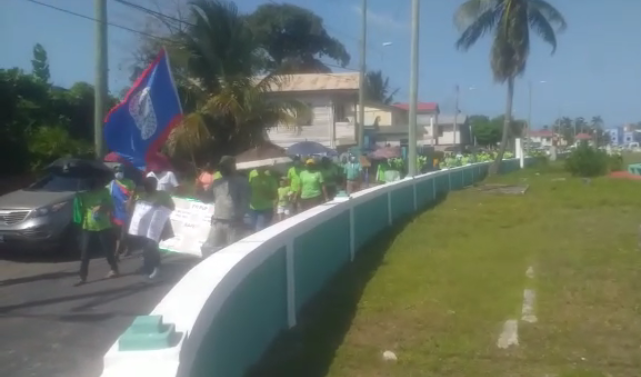 By Benjamin Flowers: The Belize National Teachers Union (BNTU) began its second week of strike action today, and while the Government of Belize is not backing down regarding the 10 percent salary cuts being implemented for teachers and public offices, the union says GOB has not discussed compensation as an alternative.

BNTU President, Elena Smith explained today that, thus far, the government’s only offers have been concessions such as shortening the workweek and working with banks to offer special financial products to teachers affected by the salary cut; however; GOB has not replied to its proposals for compensation which included a promissory note for the amount lost which will be redeemable in a set time, compensation in the form of land, or a line of credit that can be used to pay off mortgages in 10 years.

“Those have been mentioned from our end, but we have not gotten back from them a response to say that Cabinet has agreed and how we will be moving forward,” Smith said.

GOB maintains that the salary cuts are necessary to balance the country’s poor economic standing which currently reflects a revenue collection shortfall of nearly 30%, a primary deficit of 8% of GDP, and debt-to-GDP ratio of around 130% of GDP.

The Joint Union Negotiating Team, which is comprised of the Public Service Union (PSU) and Association of Public Sector Senior Managers (APSSM), BNTU, and National Trade Union Congress of Belize (NTUCB) met with GOB this afternoon at the House of Culture in Belize City to resume negotiations.