Point and Counter-Point: Picasso Blue – The orange economy in Belize 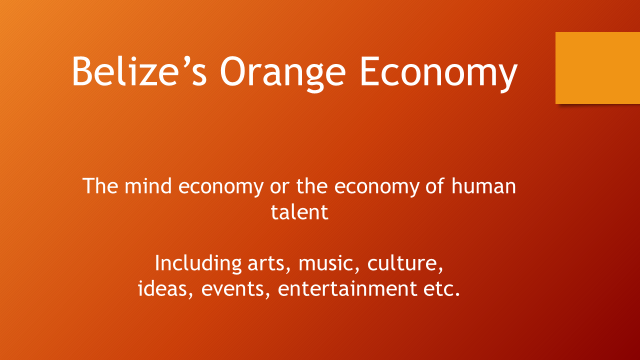 One Economy that has been under the radar for decades as a distinct economic sector is the Orange Economy. Market activities in Architecture, visual and Performing Arts, Crafts, Films, Designs, Publishing, Research and Development, Games and Toys, Fashion, Music and Advertising, Software, TV, Radio, and Video-games are some of the sectors that make up the Orange Economy as defined by John Howkins, one of the most influential researchers on the topic.In this regard, the question that needs exploring is: To what extent is there the political will to convince the talents of the 107,000 mostly unemployed youths between the ages of 14 and 24 years living in Belize to consider the early adoption of business models based on “mind-factors” (the core of an Orange Economy Revolution) and to build an empire based on this activity?

There have been efforts by a few pioneers to venture in this direction including the late George Gabb in wood sculpture, Luis Belisle in Painting, Pen Cayetano in Music and Painting, Fernando Cruz in Portraits and Murals, Yasar Musa in Publishing, Ann Williams in Fashion, and Dr. Rene Villanueva in Radio. By and large, however, these efforts, even the ones that have succeeded in building an empire based on this activity, are treated by the society as a public good, a perspective that has been very harmful to the artists and creatives because it has denied them at least two fundamental rights viz. the recognition of their artistic and creative activities as a legitimate career and rightful compensation; and it has denied the society the kind of progress that artists, creatives and the entire value chain can deliver. The latter is especially significant since the size of that value chain in US Dollars is huge!

Latin America and the Caribbean, including Belize, have always had great potential to develop creative industries through innovation and cultural heritage. Why this potential in Belize and the region has not been fully realized is a challenge that many leaders in the region face given that the trade in creative goods and services – herein after called ‘mind-factors’ – has had a very good decade. From 2002 -2011 exports grew 134%, according to the United Nations’ Conference on Trade and Development (UNCTD).

If UNCTD would include the Orange Economy within the classification system of International Trade Centre (ITC), they would be the fifth most traded commodity on the planet. According to the book “The Orange Economy: an infinite opportunity” written by Philipe Baitrago, and Ivan Dague Marquez, and edited by the InterAmerican Development Bank (IDB), it is possible to distinguish between creative goods (visual and performing arts, crafts, etc.) and creative services (architecture, cultural leisure, etc). In 2011 exports of creative goods and services reached $646 Billion Dollars, but services grew 70% faster than goods since these transactions are increasingly being made over the internet. Measured in trillions of dollars if the Orange Economy was a country, it would be the fourth largest economy in the world after the United States, China and Japan, the ninth largest exporter, and the fourth largest labour force with 144 million workers!

Though almost 1.77% of the world’s exports in creative goods and services originate in Latin America and the Caribbean including Belize, less than a third of these exports go to other countries in the region. More than 64% are directed to developed economies and less than 3% go to other developing markets. Most importantly is the recognition that current trends in creative trade are tilted in favour of services and nations with a “mind-factors” intensive digital strategy are set to take the lead and turn the Orange Economy into a main development target for generating employment and wealth. Furthermore, mind-factors such as Art, Design, Video-games, Films and Crafts, carry with them an intangible symbolic value.

The Orange Economy, therefore, seems to hold a lot of promise for a country like Belize, but in order to actualize that potential, there has to be the political will to convince the talents of 107,000 youth between the ages of 14 and 24 years to consider the early adoption of business models based on mind-factors, i.e. businesses that generate creative goods and services, and to inspire these young talents to build empires based on this activity.

Action on this is urgent given that currently, Belize has a mixed economic system which includes a private enterprise system, combined with centralized economic planning and government regulations.Agriculture is still the number one industry in Belize contributing 20% of the GDP and employing about 25% of the labour force.  Tourism is the number two industry, representing about 17% of the GDP. The unemployment rate in Belize during the height of the COVID 19 Pandemic was about 45%. The Orange Economy has become big business and a targeted avenue for countries like ours to generate employment and create wealth.This sector needs some urgent reforms if Belize is going to help especially its young citizens to capitalize on this rapidly expanding area of wealth creation. We owe this to our artists, our creative workers and most importantly our unemployed youths. Our banks, financial centres and creditors need to begin to recognize the careers in the Orange Economy as legitimate careers worthy of much needed credit and loans that is required as capital to jump start the Orange Economy and to put our creatives to work in creating much needed national wealth.

Feel free to challenge any or all of the issues raised in the piece above let’s get the discussion on the sustainable development of our country going.