Vital Statistics to close on Friday, September 3, to sanitize offices

BREAKING: Belize Customs makes concession, Guatemalan truck drivers give up protest, things getting back to normal at the Western border 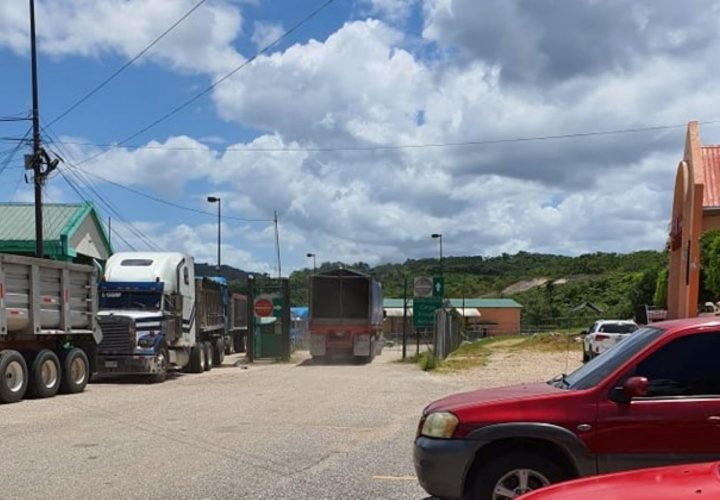 By Rubén Morales Iglesias: Guatemalan truck drivers who were blocking other Guatemalan trucks on their side of the border have given up their protest after Belize Customs made a concession and things are now returning to normal as the first trucks have crossed over to Belize.

“The process of assigning custodian and taxi to foreign trucks entering Belize in order to load local product and merchandise with the intention of exporting is canceled and no longer applies,” said the Customs and Excise Department in a letter to the Truckers Association in Melchor de Mencos, Guatemala.

For their part the Guatemalan truck drivers who come in about three times a week to Spanish Lookout to buy ground corn gave up on their attempt to not have to do COVID-19 tests at every entry, though they had also been demanding that the custodian and taxi service be dropped.

On Wednesday, the Ministry of Health said that Cabinet decided that all persons coming in through the land borders will have to be swabbed on entrance for PCR or Rapid COVID-19 tests at their own expense.

However, from Tuesday, the corn truck drivers blocked the border on the Guatemalan side causing a backlog of 70-80 trucks in Melchor waiting to cross into Belize with other merchandise.

The Guatemalan truck drivers who cross regularly for ground corn used as cattle feed were blocking the road at the Melchor side of the border complaining about the number of times per week they have to be swabbed and the price they have to still pay for the accompanying custodian and taxi service.

“My trucks have been there since Tuesday and can’t cross,” Melchor truck owner Gloria Xiomara Matus told Breaking Belize News in an exclusive interview on Thursday morning. “Right now, there are about 70 to 80 trucks that transport other goods such as cement, iron, and fuel held up in Melchor parked around the gas stations and the streets.”

Trucks stuck in Melchor were also bringing in plastic for packaging, cement clinker used in the production of cement, and food products like cooking oil and shortening said a Belizean source at the Benque border.

Matus said the ground corn trailer trucks cross two or three times per week, so the drivers the requirement that they have to be swabbed each time is inconsiderate

Matus said they were willing to pay $100 for each COVID-19 test but wanted Customs to drop the custodian and taxi service since they saw it as unnecessary and too costly. Matus said they were required to pay $60 for a custodian and a $100 for taxi service for every two trucks, but that the custodians and taxis on many occasions just charged but did not provide the service staying at the trucks corral on the Belize side of the border.

In the end, Customs dropped the custodian and taxi requirement but said the truck drivers would have to comply with all the other border requirements which include health and immigration verification, registration of trucks with Customs, search when leaving the gate, and complying with Belizean COVID-19 protocols.

When called to a meeting this morning, the truckers acquiesced, and they started crossing the border at about 11:30 am.

A Belizean at the border said that this requirement is just a business and nothing else. The person confirmed that the trucks in question do come in three times a week and the drivers have to be swabbed every time and it’s true that there are instances of bleeding. The authorities don’t want to accept their vaccination cards nor their COVID-19 tests, claiming they have to be swabbed on entry said the source who questioned why the same thing is not required at the airports.

Both Belizeans and Guatemalans stood to lose if the problem had remained unsolved.

The Mennonites at Spanish Lookout would have remained with great quantities of lost ground corn and the Guatemalan truckers would have fewer jobs.

Matus said that each of her trailer trucks crosses about 800 to 900 100-pound sacks of ground corn three times a week. Smaller trucks transport approximately 500 sacks. She feared she would have lost that business as her clients would look elsewhere for the cattle feed.

“They’ll have to bring in corn from Honduras. Then, the Belizeans won’t sell their corn. If they don’t allow us to cross, we’ll turn around and go to Honduras, and pay duties in Honduras,” she said. “Every trip, we cross from ten to 15 trucks, but right now they are only allowing nine or ten trucks.”

Matus said the product is cheaper in Honduras, but the farmers prefer the ground corn from Belize because it is much better as cattle feed.

“Prices in Honduras are cheaper, but people here prefer the Belize corn. I don’t know what the Mennonites add to their soil to grow such good corn the way Guatemalans like it for their cattle. The beef cattle put on weight faster.”

For now, even the Guatemalan cattle might be happy that they will be getting their next meal from Belize.