Stabbing in Ladyville results in two causalities: one murdered and another wounded

Sunday, April 26th, 2015. BMG: Around 9:34 pm on April 25th, 2015, Ladyville police responded to a report of a fight at the Blue House Bar situated between miles 8 and 9 on the Phillip Goldson Highway in Ladyville Village. 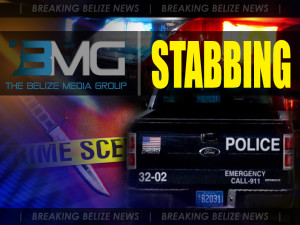 Upon arriving at the scene, they found the body of 41 years old, Wilmer Antonio Cisneros, a supervisor at M&M Engineering lying motionless on the floor with stab wounds to the chest and abdomen.

Also seen with a stab wound was 30 years old Nicaraguan construction worker of Belize City, Roger Jimenez who identified Cisneros for the police.

Police later learned that both Cisneros and Jimenez were inside the Blue House Bar socializing when they were approached by two security officers of the establishment and a misunderstanding led to an altercation in which both men were stabbed.

Cisneros was transported to the KHMH where he was pronounced dead at 12:05a.m on April 26th, 2015 and his body now awaits a post mortem examination.

The two security guards have since been detained as a result of this incident.