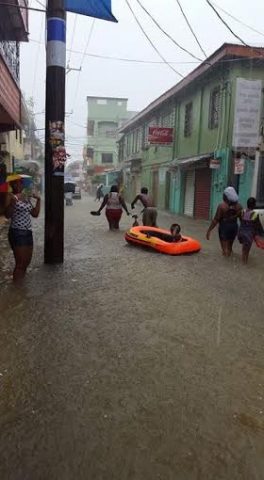 Sunday, October 18th, 2015. Aaron Humes Reporting: The Old Capital is under water this evening, and lots of it. In the last 36 hours there was ten inches of rainfall over Belize City, 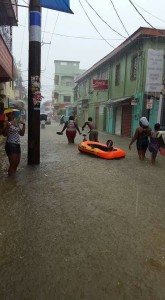 inundating not only low-lying areas but parts of the City that have never been flooded to this degree.

Other parts of the country are also battling some flooding issues, but it is Belize City and particularly the Southside which have been most greatly affected.

This afternoon, Prime Minister Dean Barrow and coordinators of the National Emergency Management Organization hosted a briefing at the ITVET Compound on Freetown Road, one of whose buildings doubles as a currently open shelter for affected residents.

In opening the briefing, Prime Minister Barrow conceded that Belize City has been hit with a crisis, nearly a disaster, and certainly an emergency not only for residents but also for authorities who have had to scramble to coordinate assistance for evacuation, shelter and other immediate needs. Chief Meteorologist Dennis Gonguez of the National Meteorological Service who says that residents of the Old Capital can expect more rain, though lessening in intensity, going into the start of the work week.

In Belize City, some 100 residents are currently sheltered at Maud Williams High School, Salvation Army (for special needs persons), St. Luke Methodist, Young Men’s Christian Association on Fabers Road and the UB Engineering Building on Northside. Other shelters will be opened on an as-needed basis. 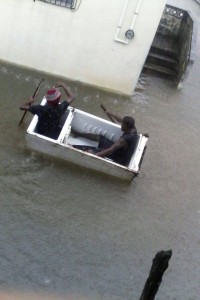 According to City Councilor with responsibility for emergency management Philip Willoughby, some evacuees have been going back home to check on their supplies but he warns that this is putting yourself at unnecessary risk.

In the same vein, because emergency matters are dealt with on a first-come, first-served basis, the Minister responsible for National Emergency Management, Senator Godwin Hulse, warned that unless you absolutely need to go to a shelter, do not tie up the responders’ time unnecessarily. Police, BDF, Coast Guard and other authorities are assisting in evacuations to shelters, but there are standby plans to move residents out of Belize City depending on the situation tonight and tomorrow.

Prime Minister Barrow reiterated that the cleanup and reconstruction starts as soon as the waters recede, but he made a call for all Belizeans to come together, even in this election season, and help each other get through this moment of crisis.