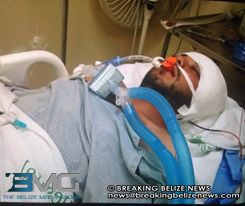 Tuesday, November 3rd, 2015. Victor Castillo Reporting: Tonight a family in Orange Walk town is demanding justice as one of their loved ones is hanging on to life at the Karl Heusner Memorial Hospital (KHMH). 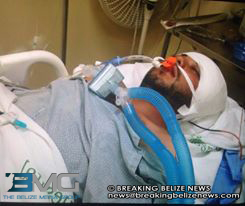 24-year-old Kevin Salazar, a well-known lottery vendor, is tonight hospitalized at the KHMH in a very critical condition.

Belize Media Group was made to understand by family members that on Sunday Salazar was socializing with some friends around 2:00 a.m. when one of them stood up hitting Salazar with a blunt object.

Salazar was taken to the Northern Regional Hospital where he was only treated for his injuries and later discharged. Friends that accompanied him took him home, claims one of his aunts.

Later that day, one of Salazar’s aunt went to check on him, that’s is when she realized that he was motionless on his bed. He was once more rushed to the Northern Regional Hospital and later transported to the KHMH where he underwent a surgery for two fractures on his skull and later placed in an induced-coma.

Belize Media Group understands that a report was filed at the Orange Walk Police Station and up to the publication of this article the family members are clueless on any developments made by police.