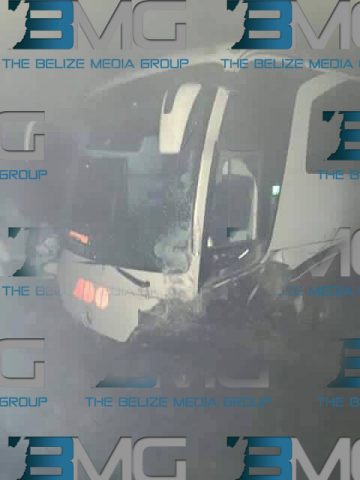 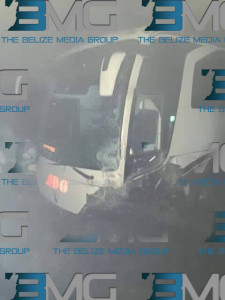 By Aaron Humes: 34 passengers traveling on an ADO bus headed to Cancun, Mexico last night lived a harrowing ordeal when a BDF assigned Mahindra pickup crashed into the driver’s side of the bus at Mile 40 on the Philip Goldson Highway just before 9p.m.

While the ADO passengers escaped unhurt, the driver of the Mahindra, BDF staff sergeant Alberto Mendez was fatally injured. In fact, his body was trapped inside the vehicle.

The bus ran off the road and dragged for several feet into the marshy terrain.

Lieutenant Argel Flores, who accompanied Mendez, received lacerations to the face and complained of pain to the knee. He remains hospitalized at the medical center at Price Barracks. 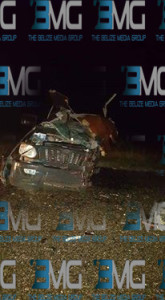 The case file has been sent to the office of the DPP for directive on whether the Mexican driver will be charged. He has provided a urine sample and has been served with a notice of intended prosecution. Likewise, a blood sample has been taken from the deceased.

As to what may have caused the accident, police say the investigation is still in its preliminary stage but there are reports that the soldiers may have been under the influence of alcohol. The BDF is looking into that report

Gilberto Carlos Perez, the spokesperson in Belize for Transportes de Lujo Linea Dorada which owns the two ADO busses that provide service from Belize City to Cancun and Merida on a daily basis, declined an interview on camera, as he required the go ahead from their legal adviser, but affirmed that they will speak with the media in due time.

He did say that the ADO bus is insured and despite the extensive damages received it is salvageable.

According to Perez, all 34 passengers arrived at their destination as another means of transportation was provided by the Company. Finally, he notified that the bus Schedule for the ADO buses remains unchanged.