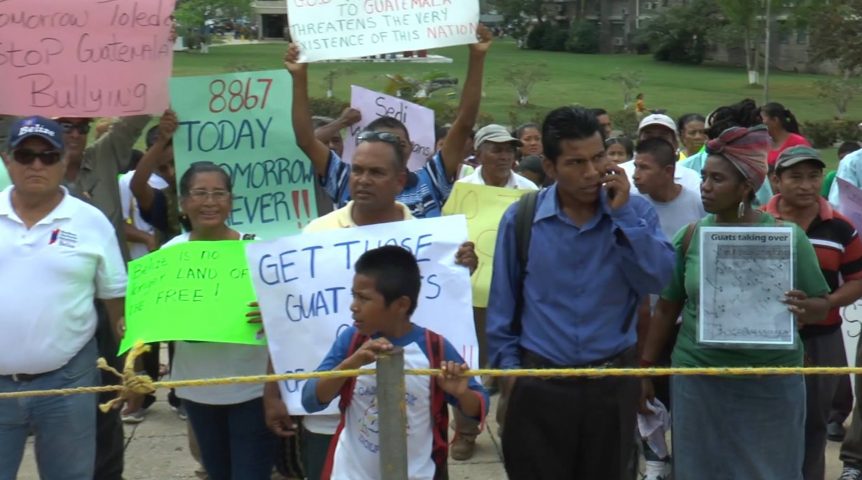 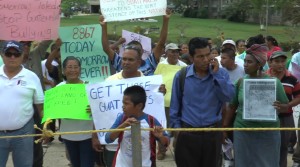 By Aaron Humes: The Belize Progressive Party (BPP) joined today’s protest on Independence Hill along with the Belize Territorial Volunteers (BTV) and a handful of Belizeans demanding that the government take a more assertive position in dealing with the Belize-Guatemala territorial dispute.

For their part, the BPP has put together ten resolutions they want government to adopt with immediate effect until Guatemala drops its claim over Belize.

These start off with requiring GOB to refuse Belizean citizenship to any Guatemalan, implementing strict immigration and customs procedures “at all informal border crossings with Guatemala…Ban the free entry of all Guatemalan maritime vessels into Belizean waters…Ban the importation of Guatemalan products into Belize…Ban Guatemalan citizens and corporations from owning property and/or interests in any business in Belize.”

That’s just the start. The BPP wants government to also “Apply eminent domain for the re-possession of all land along the Sarstoon River that has been privately owned for more than 10 years without development. Open an all weather road to the banks of the Sarstoon for the establishment of agricultural communities by born Belizeans. Preference shall be given to Belizeans who have never held a piece of land.”

Other strict measures the BPP want implemented is to have compulsory service in the Belize Defence Force (BDF) by every Belizean upon reaching 18 years, repeal the Maritimes Areas Act which is “rejected by the Guatemalan Congress”, rescind the adjacency zone agreement that the BPP says has never been respected by Guatemala but only “served to weaken Belize’s sovereignty over its territory.”

Finally, the BPP is asking that GOB rescind the Compromis and Amendment altogether. The BPP says the documents are “the premier example of the failed PUDP ‘4A Policy’ of: APPEASEMENT, ACQUIESCENCE, ACCOMMODATION and ADHERENCE.”

The BPP is also of the position that taking the dispute to the International Court of Justice is not ideal but suggests an alternative. Leader of the BPP Patrick Rogers says the matter will be best settled at the United Nation’s Security Council, which has the mandate to keep international peace and security, and not the ICJ. The ICJ, he adds, “exposes Belize to lose territory.”

In Belize’s history the United Nations passed resolutions on Belize as leaders struggled for independence. These, says Rogers, reaffirms the right of Belizeans and the BPP is convinced the dispute is best settled on that platform.

Rogers told BMG in a brief phone call that the party will be issuing a release on the matter on Wednesday.