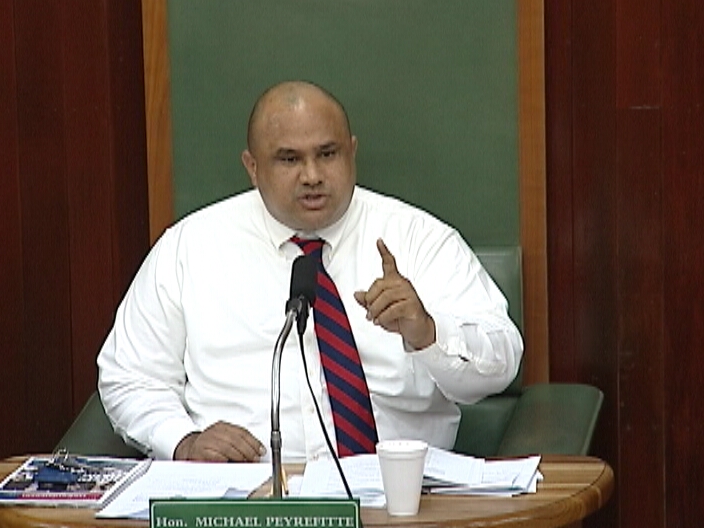 [The views expressed in this article are those of the writer and not necessarily those of Breaking Belize News.]

“We’re a different sort of thief here, Lamora. Deception and misdirection are our tools. We don’t believe in hard work when a false face and a good line of bullshit can do so much more.” ~ Scott Lynch, The Lies of Locke Lamora

The obstreperous goings-on at last Friday’s House meeting in Belmopan was disgusting, disgraceful and distasteful.  It was not however, surprising.  Those of us who have been observing the style and pattern of this UDP administration over the past eight years or so, have become quite familiar with the tactics employed.  We would or should have known what to expect and the real surprise is, that the Hon. Julius Espat did not.  He allowed himself to walk into a trap.

Julius is relatively new to the game of politics; I mean, when compared to the likes of Dean Barrow, Michael Finnegan and even a few members on his own side of the House.   Relatively speaking, Julius is but a babe in the woods.  Those woods into which this babe has ventured however, is full of some very wily, devious and bloodthirsty jackals; they play their game at a very high level.

I believe that Julius Espat is one of those young and bright politicians that we keep hoping would come along.  He is energetic, committed and hell-bent on doing big things for his constituents of Cayo South.  The problem is that Julius has not quite polished his game and sometimes appears too eager.  This has caused some friction between him and the Speaker, who is himself eager to prove that he is the Boss.  The two has locked horns on a number of occasions and in Kriol we would say that “the Speaker got it een fah ahm”!

The unfortunate thing is that there were some significant issues on the agenda for last Friday’s House sitting and as a result of what happened, no address was given to these matters.  The Auditor General’s report is damning and lays out in detail, the many improper and illegal acts by many members of Parliament.  Names are called and dates are given and if it is evidence you want Mr. Prime Minister, here it is!  The cows in the House however, know exactly where the weak fence is and Julius’ temperament became a target.  The seasoned veterans like Said Musa and Mike Espat or many of the others might not have bitten that bait, but Julius has some things to learn.

It would be difficult for anyone to convince me that what happened in the House last Friday was not orchestrated and pre-arranged.  We have seen much worse insults hurled across the floor and frequent violations of these supposedly sacrosanct Standing Orders.  In fact, just a few minutes prior to Friday’s ruckus, the Prime Minister was freely tongue-lashing young Kareem Musa, calling him “maladroit”, “baby brains” and a few other unmentionables.  One would think that in fairness, the Speaker would do as he does whenever any member of the Opposition dares to step out of line.  The Prime Minister is known to ramble all over the place, speaking on issues not even remotely “connected therewith or incidental thereto” the matters on the floor.  Yet, not once has the Speaker ever stopped him or cautioned him.  You mek any members of the Opposition try that!!!

In an interview aired on Channel Five this Monday, Michael Finnegan of all people, admonished Julius Espat calling his actions “unfortunate, disrespectful and disgraceful”;   Finnegan now, who once called former Speaker of the House Elizabeth Zabaneh a “biased son of a bitch”!   When it comes to “disrespectful and disgraceful” conduct in the House, few can match the member from Mesopotamia.  Finnegan is often disrespectful, in particular to female representatives on the other side of the aisle and once ask Honourable Dolores Balderamos if she had seen the size of the Mace Bearers’ penis.  Finnegan is known to be rude and disrespectful to women inside and outside of the House of Representatives, once asking the Prime Minister with an obvious sexual innuendo, what he had done or hadn’t done to Audrey Matura.  And who could forget Finnegan referring to Rhenea Nunez as “that Kerobee bitch”?  Yet, not once has the Speaker rose to correct or curtail Finnegan’s antics.   And this, my people, is the man teaching us about civility and decorum in the House?  Wheel and come again.

The fact of the matter is that Julius Espat was not wrong in what he said; he might only have been wrong in saying it.  Is the Speaker biased?  You damn right he is!  The problem is that every person that has ever held that position has been bias but none has ever been so blatant or extreme in their display of prejudice, partisanship and partiality.  One can understand Julius saying that the Speaker is being paid to block the Opposition because that is how it seems.  I cannot remember the Speaker even once, stopping any member from the government side from speaking on any issue and in any manner that they choose.  Yet, members of the Opposition are held within strict rules and guidelines of the Standing Orders.

A big part of the problem is in how the Speaker is chosen.  According to the Constitution, a Speaker is supposed to be elected by members of the House.  I can remember following the General Elections, the Prime Minister naming his Cabinet and also naming the person he had chosen to be the Speaker.  Was there an election that we did not know about?

I believe that it is time for this process to be carried out differently.  The Speaker of the House should not be appointed by, nor should they serve at the pleasure of the Prime Minister.  His role in maintaining order and decorum in the House is too vital to democracy for him or her to be so one-sided.  I think that it is about time that we demand that the Governor General start earning his salary.  Positions like that of Speaker of the House should be taken outside the purview of politics and applicants should not be connected to one particular party or the other.  The current Speaker for example once ran as a candidate on the UDP ticket and there should be no doubt where his loyalty lies.

This is also one of those positions that could be filled with someone from the Diaspora.  They have been clamoring to get involved in the process of governance and the Speakers for both upper and lower House could come from that pool.  It is time that we step outside of the box and take the necessary steps to improve our current state of affairs.  What we have is not working; it is broken and it is in need of urgent repair.

As for the Auditor General’s Report, we must make sure that this does not “blow over” and that it is not swept under the rug and forgotten.  The UDP have already begun their campaign to discredit and no less than the Speaker himself was on tv the night before the House Meeting, questioning its validity.  We need a Senate Inquiry and we need the Police to investigate those cases that were obviously criminal.  We also need to recall all those fraudulently issued nationalities and examine our voters list to see how this has influence our past two elections.  According to the report, fifty-five thousand (55,000) passports are said to have been issued without proper documentation.  This poses a threat to not only our own national security but that of our neighboring countries who allow our citizens to travel freely.  The U.S. Ambassador has already warned that this might very well affect those who wish to travel to that country from Belize.  Our already battered and tarnished reputation has taken yet another blow and it begs the question:  is this the best that is to come, or is there more? This coming Wednesday there will be a massive demonstration in Belize City.  Let us stand my people and let them know once and for all, that we have had enough.    May GOD bless Belize!

The article was written by G. Michael Reid.