A tale of two DFC’s

Freedom and democracy under attack! 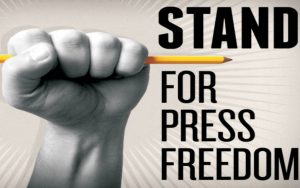 By BBN Staff: BBN believes the recent assault against the media during the Senate Select Committee inquiry and the latest attempt to muzzle members of the press by intimidation is a direct attack on democracy and the free press and must be condemned to the maximum and not allowed to continue. These events paint an even grimmer picture of a Belize already ravaged by a crippled economy and rising costs in living caused by rampant systematic corruption.

It is a clear illustration of the totalitarian rule of the government of the day and in a larger perspective it indicates that changes are badly needed to limit the power of the Executive branch of government. It is akin to living in a police state; a dictatorship. It is an abuse of human rights!

The incident which played out during the Senate Inquiry was even more shocking because it is the second such incident in the National Assembly within months where members of the press were assaulted at the behest of government officials and operatives. At Wednesday’s proceeding in the National Assembly, police officers stood by and did nothing as Brian “Yellowman” Audinett threatened to throw a cameraman from the gallery. Police did nothing when he threw a pen at another cameraman and again did nothing when he grabbed a phone out of Krem News Director, Alindy Marisol Amaya’s hand.

Senate Committee Chair Aldo Salazar, who is appointed by the government we should note, did not order for old Yeller or any of his ruckus hooligans to be forcefully removed the way 7 News Director Jules Vasquez was unceremoniously dragged from the gallery by several police officers for simply trying to do his job when Area Representative Julius Espat was also dragged out by police. Salazar didn’t even threaten to ban Audinett from the hearings the way he threatened to ban a journalist for taking a picture of Church Senator Ashley Rocke scrolling Facebook on his laptop during one of the hearings.

And now, in an even more alarming attack on the free press, Pastor Louis Wade of Plus TV has been arrested on an obviously bogus charge for trying to expose the truth about government corruption. Wade was charged with two counts of assault and using indecent words because he visited the site of the Santa Elena sports complex, currently under construction to video government equipment being used by a private contractor to complete the job. The contractor had government owned trucks, rollers, graders and workers at their disposal.

As Wade took pictures and shot videos of the scene, Robert Montero, son of Minister of Works Rene Montero, came driving toward him in a red pickup truck at high speed as if he intended to hit him. Montero used his vehicle to block Wade’s car from leaving the stadium. Wade was prepared to make a police report but when Montero got wind that Wade was about to do so, Montero went ahead and made a false report instead.

The initial officer that investigated the case found Montero’s claims to be false but he was taken off the case and replaced by an obedient officer willing to corroborate the nonsensical report made by the Minister’s son. There have also been a number of other irregularities relating to police involvement in this case.

This is how desperate the political establishment has become. They will tarnish a man’s reputation and threaten his livelihood to protect themselves from being exposed to the public. It is not acceptable, not for the current United Democratic Party (UDP) government or from any future People’s United Party (PUP) government. It seems that the government would prefer control over all media in Belize like North Korea’s government controlled state media.

BBN’s own Zoila Gonzalez was also recently intimidated by police officers for trying to record an incident in which cops were confiscating drinks on Good Friday. She was cursed by the police officers on the scene so she left. When she got home, however, she was called on her cell phone by one of the officers who threatened to lock her up for obstruction of justice.

Enough is enough, though. The media must be allowed to do its job without fear or favor. A free and fair press is one of the pillars of democracy and members of the media must continue to stand by each other but the Belizean public must also rally around this cause, as this also affects the public. It is a matter of basic freedoms and rights being stifled by the corrupted political elite. Belize is a step away from being a police state in which people are thrown in jail for speaking out against the government. Wade, who is known for maintaining pressure on the government for corruption, will not be muzzled by the government and neither will the rest of the media.

The police should not be used as enforcers for greedy and corrupt politicians and their over-privileged relatives and friends. But it is clear that Belize’s current laws allow for this overreach of power and it must be corrected. Belize is in desperate need of competent and efficient oversight bodies to provide real and meaningful checks and balances. Belizeans must stand together for freedom and truth before it is taken away from them completely!