KREM denounces attack against Marisol Amaya; calls on all media houses to stand against attack 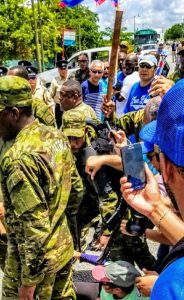 By BBN Staff: Yesterday evening, KREM Radio and TV and Amandala issued a statement denouncing the attack against media personality Marisol Amaya, news editor at KREM Radio and Television which occurred at the PUP protest in Orange Walk.

KREM says that after reviewing the videos and interviewing witnesses, “the KREMANDALA family is sure and satisfied that the violence against [their] Editor was totally unwarranted and is indicative of the violence experienced by women on a daily basis in Belize.”

“This time however, the violence was against a member of the media while she was on her lawful duty.  The images clearly show that Ms. Amaya was the only female congregated around a political leader being interviewed, along with other male media members and party supporters, when she was specifically grabbed from behind by no other than the officer commanding the Special Patrol Unit (SPU), Inspector Aaron Gamboa, who dragged her off and indecently grappled her in the process,” KREM further added in the statement.

According to the release, Gamboa never approached Amaya and informed her of his wishes for her to move, nor alerted her and thus targeted only her as she did live broadcast of the events unfolding at the scene.

“In the live coverage that was being aired on KREM Radio, Ms. Amaya could be heard saying she is being dragged away,” the release states.

KREM also says that another SPU officer, Nicholas Gomez was wielding a baton and attempted to hit Amaya when the blow was blocked by CTV-3 cameraman Fernando Pier Sanchez.

“Police officers literally picked up Amaya and threw her on the road side, while the male journalists were not likewise treated nor harassed.  In the live broadcast Ms. Amaya was heard begging to be left alone and allowed to do her job.”

General Manager for KREM Radio, Michael Hyde said that they view the assault directed at Ms. Amaya as an assault against the independent media, against women in particular and against the freedom enjoyed by journalists to freely move around and cover any newsworthy item in Belize.

“It is the hallmark of our profession in a free democratic society,” Hyde further added in the release.

Hyde went on to say that Amaya was visibly in her KREM Television t-shirt, identifying her place of employment and she was visibly on the job as she was on the phone giving her live report.

Both KREM Radio and TV and Amandala call on all media workers and all independent minded media houses to stand against this attack and to join in denouncing this dangerous precedent that is being established by the government and the security forces they command.

According to the release, Amaya has retained the services of Attorney Audrey Matura Shepherd and has proceeded to make an official complaint at the Professional Standards Branch of the Police Department and has sought medical attention for the harm done to her and the trauma that it has created.

“We call on all persons with videos of the incident, or who heard or witnessed any part of the event to please come forward as we will need every shred of evidence to take up this matter legally to our courts   and seek justice for Ms. Amaya and for the work of the media in this country”, said Matura, attorney for Amaya.