Inmate Kevin Moore dies after being shot while attempting to escape

Cop is arraigned for harm upon his 20-year-old girlfriend 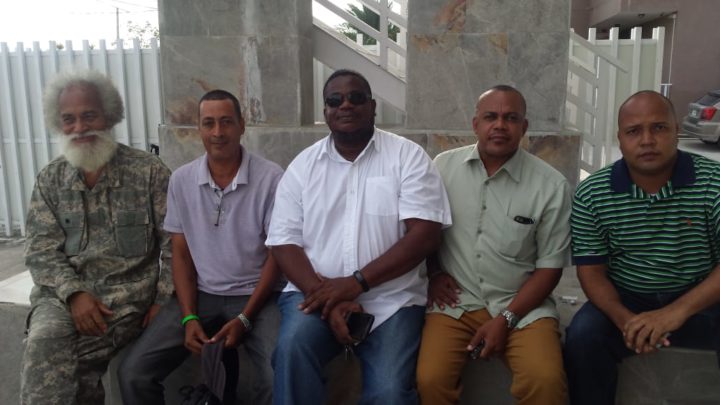 By Aaron Humes: “Today, me and P.U.P. da friend!” exclaimed member of the Belize PEACE Movement and political leader of the Belize Progressive Party Patrick Rogers, speaking to Breaking Belize News at the conclusion of a meeting with Leader of the Opposition People’s United Party John Briceño Tuesday evening at his headquarters on the Philip Goldson Highway.

Rogers explained that the movement asked for and got an audience with the PUP leader to be a “common army” for next week’s referendum on settling the Guatemalan claim at the International Court of Justice.

Applying the aphorism “the enemy of my enemy is my friend,” Rogers set the two parties and their supporters against the Government and “Friends of Belize” – the United States, European Union and its allies in the North Atlantic Treaty Organization (NATO), United Kingdom of Great Britain and Northern Ireland and generally all those who support a ‘Yes’ vote next week.

Rogers said the collaboration has to do with working alongside various PUP representatives to get out the vote and deliver a NO when the final vote is counted.

“At this point in time, we should have been to the table from the PUP announced [that they would] mobilize, then we knew they were serious about delivering a no, from then we’ve been seeking a sitdown. So we are happy to report that the Honorable Leader of the Opposition accepted our request for a sitdown; and in humility, we are happy to report that we will be officers, on that day working with the PUP, with their machinery to deliver the votes on that day,” Rogers said.

While Rogers says he personally never wanted a referendum, the Government’s “dictatorial” style and the threshold of a simple majority means every vote counts. He adds that the BPM is willing to lend its “credibility” to help the PUP convince the electorate to vote no, as its members have been against the process from the start.

The legal process, Rogers says, should not hamper the final result in their favor and the emphasis now is to get out the vote. The ongoing referendum campaign has been going well, he says, despite what he describes as a “blacklist” by the media, as he has been sought out by companies to present to their employees and been well received.

On the Wil Maheia situation, Rogers maintains that it is a campaign of intimidation in support of a potential argument at the court that it controls Sarstoon Island, which Belize claims. The takedown of the Belize flag by the Guatemalan Armed Forces yesterday is a naked “act of war” which Belize cannot condemn openly, he said, due to the same Confidence Building Measures that Guatemala is violating with impunity.

Rogers closed by noting that Belizeans have been “set up” by the UK, U.S., EU and others in a bid to control our natural resources, including potential petroleum deposits, and added that the current push to the ICJ begin when the Maya of southern Belize sought a seat at the table with developers such as U.S. Capital Energy. Rather than cut the Maya in, he told us, there is an attempt to ‘cut them off’ which Belize must defeat.///