UN Secretary-General Welcomes ‘Spirit of Cooperation’ of Belize and Guatemala 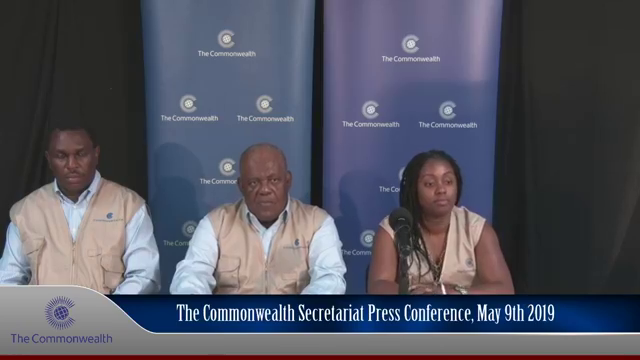 By Aaron Humes: Reporting ad interim, the members of a Commonwealth Observer Group invited by the Ministry of Foreign Affairs to observe Wednesday’s referendum have described it as “credible, transparent and inclusive,” and its result as reflective of “the view of the majority of Belizeans who voted.”

Head of the group and former Prime Minister of the Bahamas, Hubert Ingraham, particularly commended the high level of civic pride and turnout by Belizeans which, he said, had not been seen in the Caribbean in 50 years. He personally observed that all Caribbean referenda in that time had been defeated by the voting population.

The process itself, Ingraham observed, ran smoothly most everywhere and few hiccups were observed. In general, he said, Belize acquitted itself well and voters were satisfied as he had never seen before that their votes, once recorded, would be accepted and counted, in a way not observed in other countries he has visited.

But there were some hiccups nonetheless, such as some employers not giving workers time to vote and some voters who were not listed and not able to vote despite having their ID cards.

Ingraham noted that voters who did not have their new ID cards were still able to vote and said they did not see anyone who had their ID but could not vote. He promised to make further inquiries. He also said observers would report, if found, any mistreatment of media covering the referendum who were denied coverage in the vicinity of the polling station.

Ingraham told BBN that likewise, no observers reported any undue influence or bribery of voters, despite widespread allegations of such.

The veteran politician, appearing in his fourth observer mission and third as head, related an observation of one lady voter who having voted, proceeded to tell other voters in line to vote ‘No’ as she had apparently done. Though it was not part of his remit, she heeded his warning to desist.

As for actual voting, Ingraham noted that some of those he observed voting ‘No’ filled their boxes with their X as opposed to the more modest X’s of Yes voters, which he wryly said meant, “Hell no!”

The group, with representatives from Caribbean and African Commonwealth members and the United Kingdom, were previously here for the aborted referendum try on April 10, and returned on May 4 in advance of the new date. Their report to Commonwealth Secretary General Patricia Scotland will be advanced in due course.