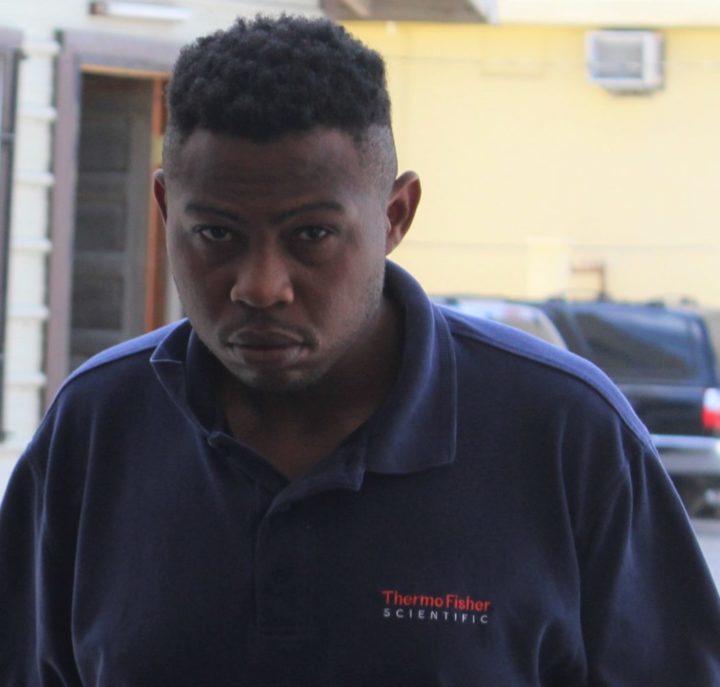 By Aaron Humes: A traumatized mom of two – who was expecting a third – fears for her life after a visit to her child’s father ended in a sustained assault that landed her in hospital and the accused, 29 year old Miguel Martinez of Caye Caulker, in court.

Since yesterday, Martinez has been out on bail after initially pleading to a charge of common assault, then changing his plea and claiming he was provoked and acted in self-defense.

The 23 year old complainant, whom we have agreed to not name in respect of her privacy, spoke off-camera after court yesterday afternoon.

She explained that last week Thursday, August 22, she learned from one of Martinez’s relatives that he was in Belize City and her elder son, aged 4, asked to visit his father briefly.

The complainant and both of her sons went to the family residence in the Jane Usher Boulevard area, but as she arrived she got into an argument with another relative of Martinez’s who accused her of bearing illegitimate (“shell-eye”) babies and dumping them on Martinez, and refusing to let the child in.

After calling another relative who was inside the house, the child was allowed to go in to wait for his father who was not there at the time; but the uncle threatened her with a machete. She left immediately to buy at a Chinese shop around the corner, and that is where she says she was accosted by Martinez, who unleashed a frightful beating.

“I see Miguel, my baby pa, come, and I ask ah weh happen? And he punch me ina my temple, and he start use a whole lot a bad word and di call me all kind a name, and he di beat up me, stamp me ina my belly, got ih foot ina my belly and I di tell ah, ‘Miguel, you di hurt me, you di hurt me!’, and like I partly black out because he di beat me pah di ground,” she said, adding that she is still in pain and her head remains swollen, not to mention the loss of her third child, two months along.

She spent the weekend in the hospital and yesterday morning at Family Court, seeking a protection order. Martinez was held by police and charged with common assault.

Appearing before Senior Magistrate Tricia Pitts Anderson, Martinez said he did not agree with the facts of the case as presented by the prosecution. He claims there was a build of frustration between him and his former partner, and this was not the first time something like this had happened.

The court entered an equivocal plea of not guilty, and after the prosecution offered no objection to bail, Martinez was granted and met bail of $1,000 and is a free man. However, he must stay away from his ex, not contact her, and is to report to the Caye Caulker Police Station

His accuser must wait until September 2 for her case at the Family Court to be heard.

The complainant, supported by her concerned new partner who was the father of the third, now lost, child, says she did not see Martinez until she went to the store; did not go into the family yard even as she left her child there, and was not in contact with Martinez as he had blocked her numbers on his phone and on social media.

But he, she says, has previously threatened to hurt and kill her, hence the need for a protection order. And she intends to pursue more severe charges for the loss of her child.

The assault case comes back to court on October 28.