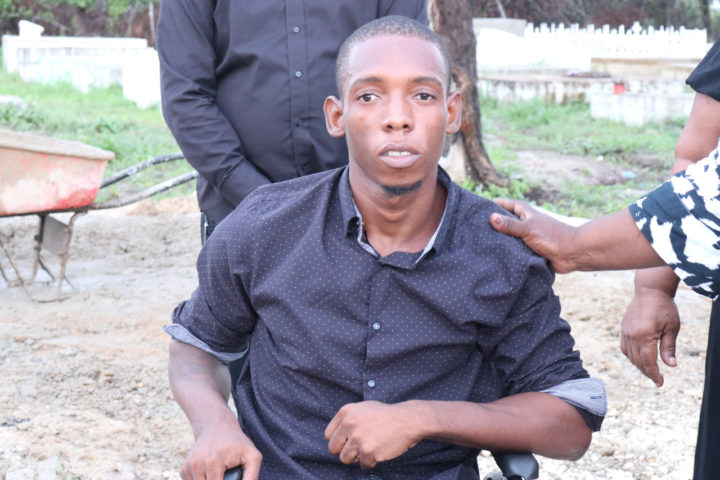 By BBN Staff: Relatives of an inmate on remand at the Belize Central Prison, Aspinal Welch, are pleading with relevant officials to give consideration to the inmate who has been confined to a wheelchair since 2017 and is currently not receiving adequate medical attention at the Kolbe Foundation, having developed a huge and terrible open sore on his buttock from which the bone is now visible. He has been rushed to the Karl Heusner Memorial Hopsital several times in the last week due to profuse bleeding and doctors insist he needs urgent, adequate attention.

Welch’s common-law-wife, Tanesha Plunkett, in an emotional interview with the media today, pleaded for some kind of assistance as she says she has been in contact with several officials including the Magistrate presiding over his case, Marilyn Williams, who remanded him to prison in September despite please from Welch regarding his condition. According to Plunkett, Welch was held in contempt of court and remanded on September 17 because he reached late to the proceeding but she contends he was only late because they were traveling from Hopkins and there were no ramps to facilitate Welch either on the bus or at court.

He has been in custody on remand at the Belize Central Prison since September and has sought bail at least twice, both of which were denied, even on one account when he pleaded for assistance because his catheter, which must remain in due to a neurogenic bladder was blocked up causing him severe pain and discomfort. According to Plunkett, the prison is not equipped to handle changing of catheters and the medics used to assist the prison’s doctor are also inmates.

Dr. Marcus Rugama of the KHMH, after examining Welch on October 18 when he was rushed in because of excessive bleeding, recommended that he be kept in an adequate environment. Plunkett made a tearful plea for Welch, acknowledging that while his past is indeed troubled, he at the very least deserves the basic medical care that should be afforded to all humans. According to Plunkett, she has taken up the matter with the presiding Magistrate, Chief Executive Officer of the prison Virgilio Murillo and the Ombudsman’s office with no progress being made on Welch’s behalf. Frustrated and exasperated, Plunkett has turned to the media to raise awareness of Welch’s condition, which is dire. His family believes that if he remains incarcerated without the proper medical care he needs, he will die in prison. The family is at the very least, hopeful that he can be granted bail and released to receive the medical treatment he so desperately needs.

She said she has been trying unsuccessfully to contact the Human Rights Commission office in Belize but is appealing for any assistance that may be offered. Welch is currently on trial for a 2012 robbery attempt that occurred at Dits restaurant in Belize city. The case has been adjourned multiple times over the years and no witnesses have come forward to testify.

Welch’s brother, Inmar, was recently shot and killed in Gales Point Manatee on October 25. Police have not yet made any arrests in that murder.