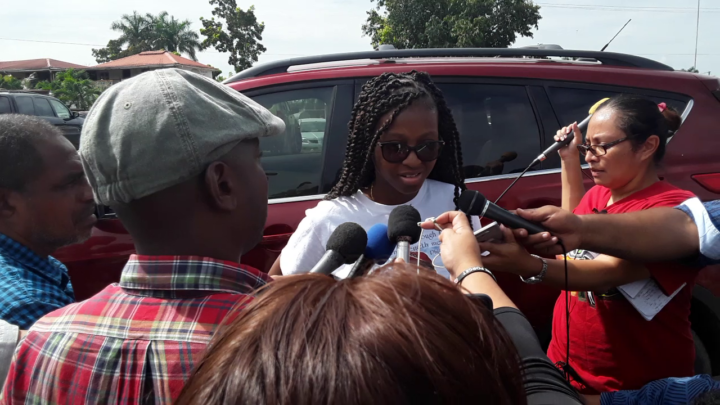 By Aaron Humes: No one more anticipated today’s verdict than the victim’s family, who sought answers as to why he died the way he did.

It fell to Llewellyn Lucas’ niece, Keixa Usher to describe the family’s relief amid enduring sadness.

“I am very happy. Like my mom always said, God is in control and we knew that this would have happened, we were convinced that my uncle would have received justice because of the person that he is…I can’t seem to understand why he died the way he did because he was a really good person. But I know that God has His way with doing everything, and He knows what happened,” she told reporters.

Usher said her mother cried “tears of joy” in court over the verdict and said the family did not know about Lucas’ dealings with his now-convicted killer.

It was down to the weight of evidence; the assistance from the Federal Bureau of Investigation (FBI) for testing of DNA and blood evidence which concerned observers asked for; the Government’s “hands-off” approach; good work from police investigators; and solid prosecution by the Director of Public Prosecutions Cheryl-Lynn Vidal.

The prosecution proved, Wade said, that Mason was the mastermind of Lucas’ death: he was an employee lured to his house, where he was kidnapped by his workmen and taken to his farm and his severed head remained in the pick-up, and that “street justice” and court justice saw it the same way.

Moreover, more of the same level of investigation, prosecution, and conviction, he said, is needed for many Belizeans still awaiting justice in other murder cases.

Finally, who is William “Danny” Mason?

That Mason so callously ordered the murder is one thing, Wade added, but there are still questions to be answered as to how the man with many aliases wormed his way into the Belizean polity at such a high level.