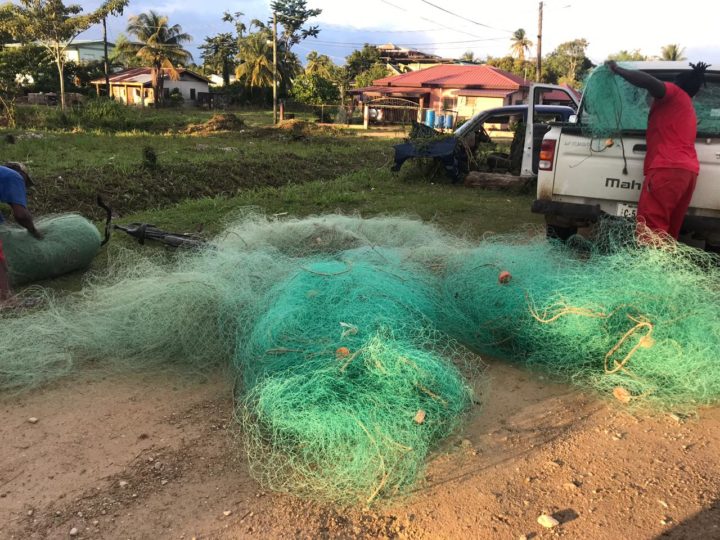 By BBN Staff: The Belize Federation of Fishers (BFF)  issued a statement today informing that it held an emergency meeting on Sunday, December 9 to discuss options following the disappointing press release from Government that fell short of banning gill nets.

Due to the statement from the Government, the BFF received many calls from concerned fishers.

The BFF says that most fishers are of the view that the proposed changes do not go far enough and that the enforcement measures being taken will not be effective.

“We feel that a total ban is needed,” the BFF noted.

In addition, the federation says that more than a dozen gill net fishers have indicated to the BFF that they are prepared to immediately give up their nets providing that alternatives are made available.

“Gill nets are causing serious harm to our marine ecosystem and the BFF is greatly concerned about the future of the fishing industry if gill nets are not banned. The nets will eventually be gone when there are no fish left but we prefer to see a ban that promotes a sustainable fishery for future generations of fishers. This issue was thoroughly evaluated by a two-year Gill Net Task Force with support from an independent consultant,” the BFF said.

The BFF notes that at the end of the research and evaluation, the consultant reported back to the members of the Task Force that 95% of the data submitted by gill net users and other stakeholders favored a ban.

However, this was never publicized.

The fishers also note that it is a serious threat to national security because most gill net users in the South are Guatemalan and Honduran fishermen who move back and forth across our maritime borders unimpeded.

The BFF applaud the government for its new regulation to restrict fishing licenses to only Belizean Nationals, however, imposing regulations on types of gill nets has been tried before without success – given poor enforcement – and there is no reason to believe that additional regulations in that regard would be effective now.

“Having been an active member of the Belize Coalition for Sustainable Fisheries for the past 1 ½ years, we are aware that excellent opportunities could be available for gill net fishers interested in giving up their nets. The Coalition has raised $1,000,000 to retrain and transition gill net fishers to other alternative livelihoods and Oceana Belize has raised an additional $1,000,000 to buy back fishers’ nets. With these resources, we are confident that we can transition the 83 licensed gill net fishers to sustainable livelihoods,” the statement added.

The BFF says that it will, therefore, move immediately to work out a transition plan with interested fishers so that the funds are not all lost, given the deadlines set by donors.

The BFF reiterated the need for a gillnet ban and says that it is committed to working with Government to make it happen.

A ban would benefit our industry, gill net fishers and the country.