Bandits continue on a tear in Premier League

UDP NATIONAL CONVENTION: Saldivar and Faber hug it out after results 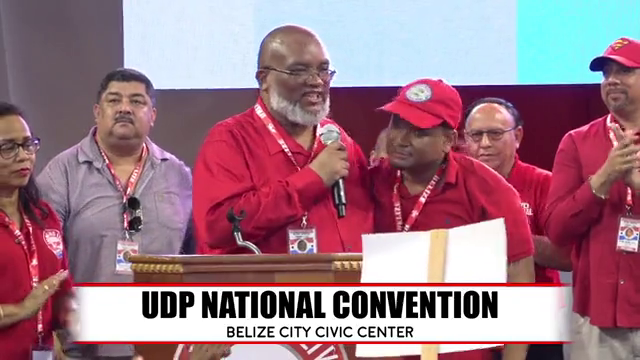 By Aaron Humes: After one’s victory, two good-friends-turned-rivals gave each other a ‘man-hug’ on the convention floor of the Belize Civic Center.

It was, at last, the thrill of victory for John Saldivar, who was previously unable to get past the Patrick Faber hurdle for chairman of the United Democratic Party in 2010 and first deputy in 2016.

But it was the agony of defeat for Faber, so close to fulfilling his precocious rise to the top, only to now be side-lined for the second time.

Nevertheless, to hear both men tell it, absolutely nothing has changed.

Before addressing the convention, Saldivar called Faber to the podium and embraced him, promising they would work together “to bring victory” for the Party.

He then proceeded to give thanks to all the party supporters, in English and Spanish, for their support, and his running mates, Hugo Patt and Beverly Williams, and the returning Alberto August.

“Together, we will work to carry on the legacy of our great leader, the Honourable Dean Barrow… there is a lot of work before us, a lot has been done for our country. We must shine our light so the country can see that we are the best option to govern this country. We are going to continue the work, the transformation of this beautiful country of ours. Juntos venceremos! Together, we will win!” Saldivar stated.

As for Faber, he reiterated, “I have told you that the Honourable John Saldivar and I are friends – how much times I noh tell unu – and I told you that I have nowhere to go from this party; I am 100 percent with my colleagues; 100 percent in support of the Honourable John Saldivar; expect my full cooperation and love for my colleagues,” before going on to exhort his supporters to join in and organize to defeat “the true enemy,” the People’s United Party.

And with that, the road to the general election has begun in earnest.