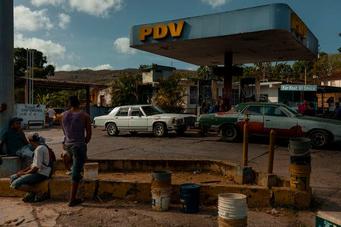 By BBN Staff: The Bolivarian Republic of Venezuela has allowed foreign companies more control of its oil in an attempt to survive mounting economic pressure, according to a recent article published in the New York Times.

The piece, published on February 8 and written by Anatoly Kurmanaev and Clifford Krauss was titled “To Survive, Venezuela’s Leader Gives Up Decades of Control Over Oil.”

The article notes that years of economic crisis and imposed sanctions by the United States and its allies have placed Venezuelan President Nicolás Maduro in a position of desperation, which sees him relaxing policies that have kept the government in command of the oil reserves for decades.

“Private companies are pumping crude, arranging exports, paying workers, buying equipment and even hiring security squads to protect their operations in a collapsing countryside, according to managers and oil consultants working on the country’s energy projects,” the NY Times said.

The Times stressed that oil fields wholly owned by the state-owned oil company Petróleos de Venezuela (PDVSA) account for less than half of the nation’s remaining oil production, as production continues to decline. The Times also said that Chevron has become the single largest foreign producer of oil in Venezuela, and a crucial part of the country’s stabilization over the past few months.

The Times also stressed that corruption has played an active role in Maduro’s current situation, as it chronicled the oil struggle saga beginning with former President Hugo Chávez nationalizing the “giant holdings” Venezuelan oil held by Exxon Mobil and ConocoPhillips back in 2007, and leading up to the 2019 Bloomberg report which showed that Venezuela’s oil production was at its lowest point since the 1940s.

Notably, mainstream media, particularly in the United States, has on occasion covered only specific angles of the Venezuelan economic crisis, while not fully covering others or neglecting to cover them entirely.

In May 2019, the Belizean Organization for Solidarity with the Bolivarian Revolution (BELVEN), held an information session, revealing pertinent information and an apparent international narrative being pushed referencing the crisis.

Included in the information shared, was a comparison between the protests launched by supporters of the US-backed Juan Guaidó, who declared himself interim President of Venezuela, against the rally of those who were in support of Maduro. BELVEN called out the mainstream media for attempting to sensationalize the pro-Guido rally while giving no acknowledgment to the pro-Maduro rally, which was considerably larger.