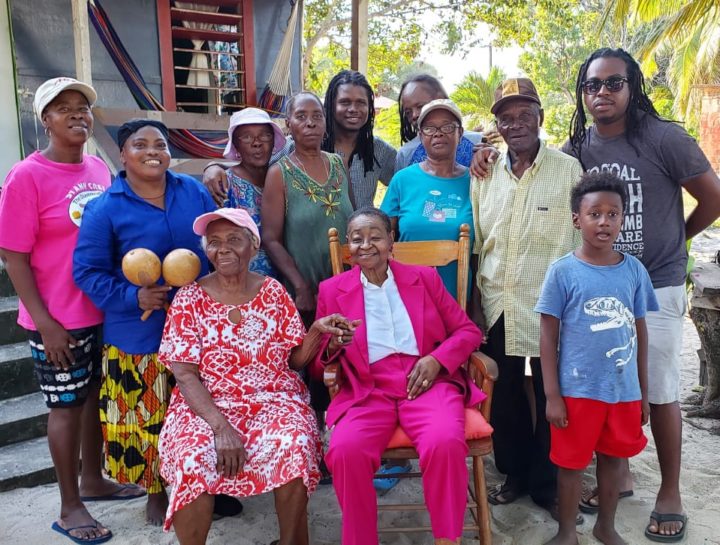 By BBN Staff: Residents in Southern Belize are enjoying the shooting of the video for a remake of ‘Watina’ with Calypso Rose.

Pictures shared with BBN by #HopkinsUncut shows residents dancing proudly to the rhythm of the music.
Stonetree Records announced that, in co-production with Maturity Music (Trinidad) and Because Music (France), it is releasing a new album by Calypso Rose in April, 2020.

The album was recorded in Belize and France between 2017 and 2019 and includes songs featuring Machel Montano, Manu Chao, Nailah Blackman and Belize’s very own The Garifuna Collective, performing a striking new version of Andy Palacio’s iconic song Watina.

The shooting of the video is being done in Hopkins Village, the same place where Andy Palacio and The Garifuna Collective recorded the original version of the song in 2007.

“It is an honor to welcome Calypso Rose back in her adopted country as we continue to showcase Belize and its music to new international audiences,” a statement from Stonetree noted.

Calypso Rose’s previous album “Far From Home” produced by Ivan Duran with Manu Chao was certified platinum in France in 2016 and won the equivalent of a French Grammy for Best World Music album of the year as well as the 2017 WOMEX award.

Stonetree Records thanked The Office of the Music Ambassador, NICH, The Belize Film Commission and Hopkins Bay Resort and Muy’Ono Resorts for their invaluable support.