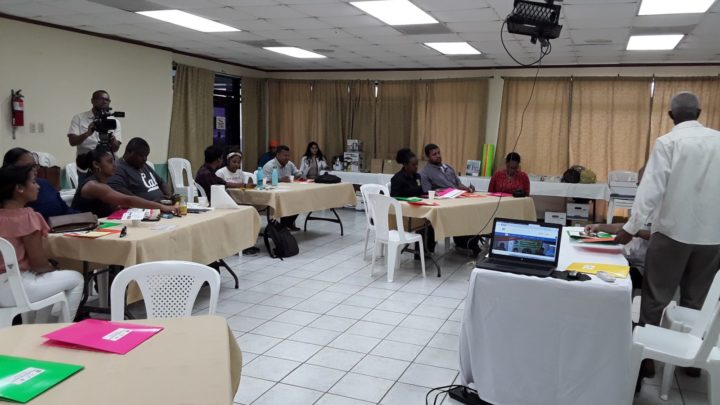 By Aaron Humes: Crime reporting, unfortunately, is one of our basic duties as reporters. There will never not be a need for reporting on the latest murder, big money heist, heinous sexual assault, or drug bust.

But much of that reporting sticks to the basics – who, when, what, where, how, and occasionally why.

The Ministry of National Security has established a Belize Crime Observatory to observe and preserve data, but wishes to take the conversation further, and so today has organized a media professionals’ workshop in Belize City, moderated by former Amandala Assistant Editor, senior reporter and interim technical coordinator for the Observatory, Adele Ramos.

In opening the meeting, Ministry CEO Ret’d Col. George Lovell said the partnership between the Ministry, the press and the Observatory is more than “shake hands,” and that he looked forward to a candid discussion on how reporting of crime, especially murder, is done.

Senior Superintendent of Police and deputy head of National Crimes Investigation Branch, Hilberto Romero, followed up with a general report on the state of crime in Belize as seen by police.

Major crimes have trended down since 2015, and by nearly 8 percent in 2019. Murders were down by nine for 2019, a total of 134, of which 57 percent was reported in Belize District and half of that in Belize City. But Sr. Supt. Romero says police have made progress, reducing murders in three of the four precincts and in San Pedro.

And if you want to avoid being murdered, perhaps try not being out on a Saturday or Tuesday evening between six and nine p.m. Those days have the most incidents reported at 17 and 14 respectively and the time period saw 23 murders reported, followed by mid-morning to early afternoon between 6 a.m. and 3 p.m. Sr. Supt. Romero says the shooters canvass grocery stores and strike between those times.

And the gun remains the most common weapon used to commit crime, but drinking of alcohol or taking drugs, is the most common reason, followed by gang-related and domestic-related incidents.

We’ll have more on crime trends later on, but there will also be presentations from the National Forensic Science Service, and Kolbe Foundation Central Prison at Hattieville.