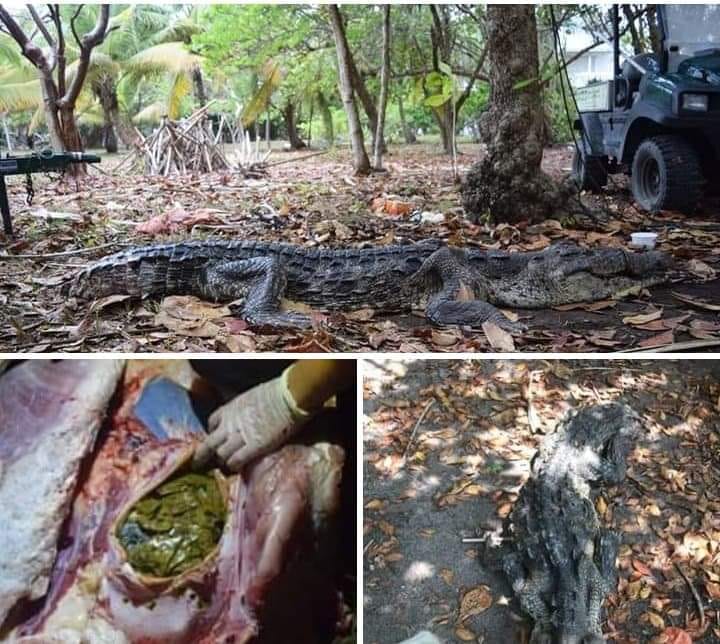 By BBN Staff: The American Crocodile Education Sanctuary (ACES) is pleading with all Belizeans, particularly San Pedro residents, not to participate in or support the illegal feeding of crocodiles. The plea follows a croc necropsy which lead to the discovery of over 80 plastic bags in the stomach of the crocodile which, had to be euthanized.

Yesterday, ACES shared the story on its Facebook page detailing an attempt to rescue a wounded crocodile only to find it with a serious injury on its tail and barely clinging to life. The animal, originally 12 feet long and weighing hundreds of pounds, was severely malnourished and with stretched skin hanging off of its protruding bones.

ACES said that it received advice from a Veterinarian and from the Department of the Environment, and then decided to have the animal put down, stressing that it was found in an area known for illegal feeding of crocodiles.

“When we finally finished, we had removed 82 – yes EIGHTY-TWO – plastic bags from inside the stomach. The ingested bags were compacted and prevented the intake of food, leading to his starvation and inability to heal,” ACES said. “It’s no coincidence this animal was found in the vicinity where illegal crocodile feedings are reported on regular basis.”

ACES noted that 70 of the plastic bags were the kind that shoppers regularly buy chicken “neck and back” in. The organization also stressed that crocodiles are territorial animals but at one point there were over 20 of them in a the same relative location, which was indicative of the illegal feedings there.

“Whether or not this crocodile was intentionally fed plastic bags, or whether they were ‘accidentally’ ingested as they were not properly disposed of after the crocs were fed, this protected species lost his life due to a crime against wildlife,” ACES added.

The organization reiterated its plea, noting that “No animal should ever starve to death on a full stomach.”