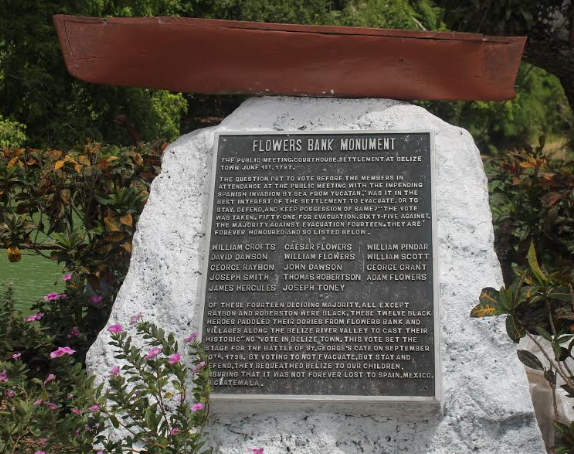 By Aaron Humes: The annual ceremony honoring the 14 men credited with saving the Belize Settlement in 1797 by voting to defend it was observed on Monday in Flowers Bank Village, Belize District.

The National Institute of Culture and History (NICH) reports that members from the Village Council, the Institute for Social and Cultural Research, Emergent Corp and community members paid tribute to the fourteen men whose decision to stay and defend Belize bequeathed the land and country we know today as Belize.

The pivotal vote took place at a Public Meeting in what is now Belize City on June 1, 1797. In response to the question, “Whether this meeting do consider it most for the interest of the community at large to continue to carry on defence operations for keeping possession of the settlement or to determine upon a general evacuation?” The vote was 65 to 51 for the former.

The eventual Spanish attack came from September 3-10, 1798, with final victory for the settlement at the Battle of St. George’s Caye, now a national holiday, on September 10.

This Wednesday via Facebook, Director of the Institute of Social and Cultural Research Nigel Encalada will lecture on the history of the 1797 Public Meeting and Flowers Bank Fourteen, while later this month a publication will be released for teachers and students on the historical importance of the event.