NEMO says George Price Highway may be open to traffic around 10:00 p.m. 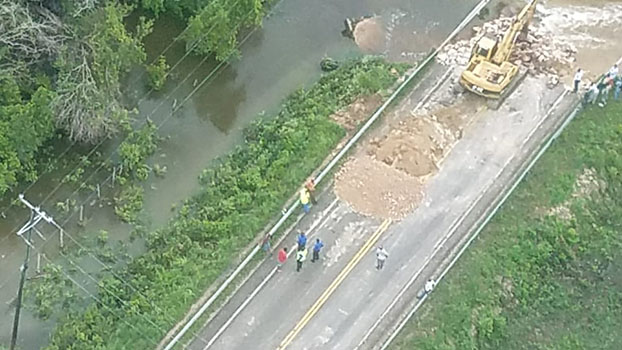 The public is advised to avoid travelling on secondary roads in the rural areas, and in particular, on the George Price Highway between Belize City and Belmopan.

The highways from Belmopan to San Ignacio/Santa Elena and to Dangriga are opened to vehicular traffic.

The George Price Highway from Belmopan to Belize City will likely be opened between 10:00 p.m. and midnight.

Areas of concern which have been impacted due to the flood are: COROZAL: San Pedro Village,

Do not drive through flooded waters. Parents are advised to monitor their children.

Do not allow children to play or walk in floodwaters.

All are advised to avoid crossing flooded rivers and creeks.

SIX INCHES OF FLOOD WATERS CAN SWEEP YOU OFF YOUR FEET. If where you are is not a safe area, move to higher ground and move away from streams and riverside.

Motorists should drive with extreme caution when on the highways and secondary roads.

The NEMO Emergency Hotline is 936. NEMO’s Emergency Coordinators can be reached as follows:

NEMO advises the public to stay tuned to their local radio and television stations for updates from NEMO and to take the necessary action to safeguard life and property as the rains are expected to continue.