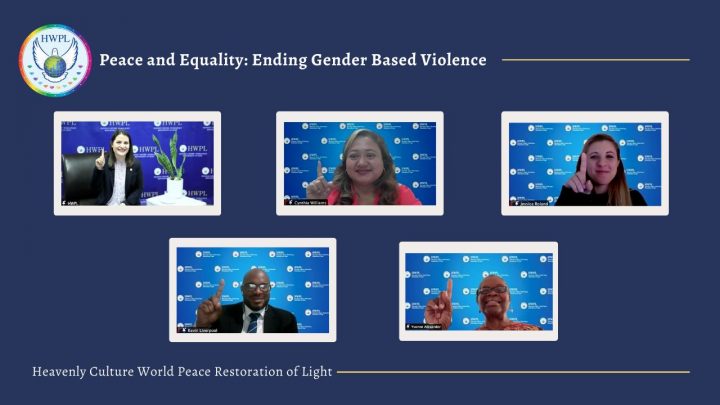 By BBN Staff: On Friday, national and regional government officials and civil society leaders from all over the Caribbean virtually came together to discuss how they can finally end gender-based violence.

The virtual event was organized by peace diplomats from the Washington D.C. branch of Heavenly Culture and World Peace, Restoration of Light (HWPL).

HWPL is a non-governmental organization affiliated with the United Nations Economic and Social Council.

The organization advocates for the cessation of war and conflict worldwide. Friday’s event was carried out by HWPL in conjunction with the International Women’s Peace Group, the International Peace Youth Group, HWPL’s Peace Advisory Council, and HWPL Publicity Ambassadors.

During this time, leaders from across the region addressed how to utilize education and youth development programs to end gender-based violence.

Kevin Liverpool (Administrator of CariMAN in Trinidad and Tobago)

“Culture is often used as a way of justifying, inequality, gender inequality, and violence, and is often used as a tool to keep the status quo. And this is the discussion we need to have, especially helping people to understand that while we are highlighting some of these negative behaviors within culture, it’s not that we’re saying that culture is bad or that we have that we’re trying to take away all these cultural nuances that make these different ethnic groups, these different populations unique, but it’s rather addressing the negative influences that are used within the culture,” Executive Director of the National Women’s Commission of Belize, Cynthia Williams said.

“I  will confess that I was very reluctant to be a panelist because I felt here it is. We’re just going to talk again, but I  want to say that I am happy that I was part of this discussion. There is hope there are things to look forward to,” Yvonne Alexander, Retired Assistant Commissioner of Police of the Dominica expressed.

Currently, HWPL is carrying out  peace initiatives in 170 countries around the world.

One of its key initiatives is its Peace education program. The organization believes peace education awakens a student’s recognition of the value of living as a citizen on this earth.

In the era of peace, HWPL peace education curriculum is being introduced not only to educational  institutions, but also at the governmental level. Pilot programs are currently underway in Haiti.