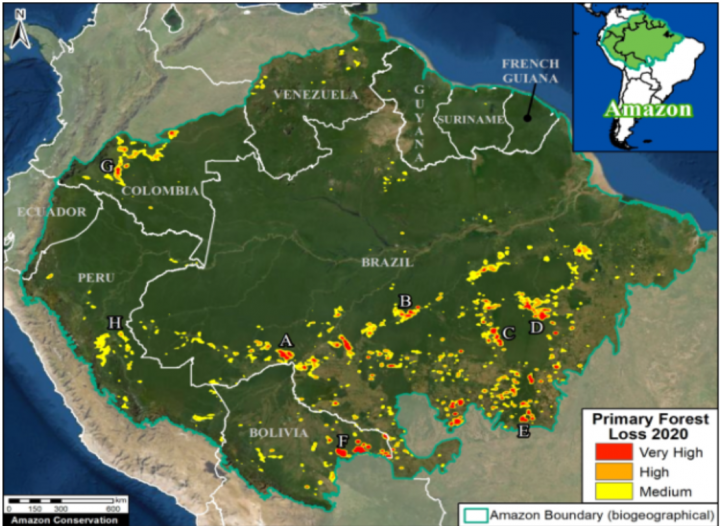 By BBN Staff: The Amazon rainforest has lost over 5 million hectares (over 19,305 square miles) of forest in 2020, according to a new report published by Amazon Conservation Association and Monitoring the Andean Amazon Project (MAAP).

While 2019 already saw considerable losses due to forest fires and land clearing for agricultural purposes, Dr. Matt Finer, Director of MAAP said that, “2020 was actually worse than 2019 across the Amazon.” Finer warned that the 2020 data is still being finalized, but that the 2019 data had surpassed preliminary estimates upon completion.

The report notes that the majority of 2020’s deforestation occurred in the Brazilian Amazon, which accounted for 50,000 acres of lost forest land. MAAP said much of the forest lost in Brazil was owed to fires, many of which were man-made. Amazon Conservation noted that there were roughly 2,500 large fires that scorched huge swathes of the Amazon in 2020 and around 88 percent of those occurred in Brazil. Much of those fires were aimed at creating pasture or cropland.

The report also said that there were around 205 large fires in the Bolivian Amazon which engulfed over 600,000 acres of the Chiquitano tropical forest between April and November. In Peru, small-scale agriculture increased deforestation in the central Amazon, and in Colombia, illicit cultivation of coca leaves (the raw ingredient for cocaine) was the major contributor to deforestation in the Amazon.

The loss of the Amazon is a global problem and an even more pressing concern for Small Island Developing States (SIDS) countries such as Belize. The Amazon rainforest often described as the “lungs of the planet,” produces around 6 percent of the world’s oxygen. Over 30 million indigenous peoples living in isolation rely on the Amazon’s watersheds.

The Amazon rainforest also absorbs a significant portion of carbon emissions, helping to fight the global weather phenomena known as climate change.  Increased damage to the amazon will intensify the effects of climate change, causing issues such as erratic weather patterns, beach erosion, and agricultural cop loss, all of which are currently rampant in Belize.