BREAKING: Patrick Faber sworn in as Leader of the Opposition 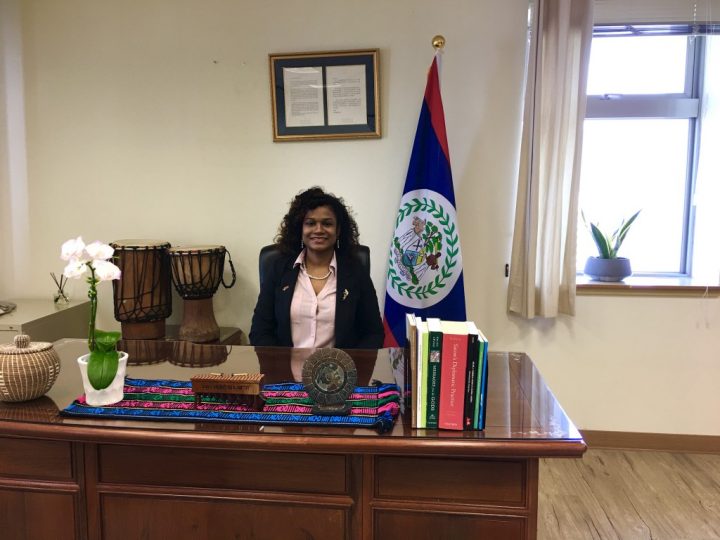 By Aaron Humes: Belize’s Ambassador in the Republic of China (Taiwan), Dr Candice Pitts, has been speaking to Taiwan News about her time in the ally nation and how she hopes to further strengthen bilateral relations during her time in office.

Pitts cited the establishment of the Belize Taiwan Academic Conference, representing the heavy level of educational investment in Belize; the Belize Taiwan Songs Commission, using the arts to promote the close relationship between the countries; and ratification of the Economic Cooperation Agreement (ECA), which was signed last year and is expected to come into effect this October.

Taiwan has already expressed interest in Belizean marine products, including lobster, shrimp, and conch, as well as Marie Sharp’s hot sauces, Pitts said. She explained that once the mutually beneficial ECA comes into effect, Belize hopes to export other goods, such as beef, pork, and citrus products.

Belize has been importing ceiling, standing, and wall fans; bicycles; as well as umbrellas from Taiwan, according to the ambassador.

Belize also participated in a food show held earlier this month, alongside other Central American and Caribbean countries, to promote domestic food products in Taiwan. Pitts said that some upcoming events include ones related to promoting trade and investment between both countries.

Pitts is celebrating Independence Day a little early with an online celebration on Friday afternoon with appearances from President Tsai Ing-wen; Prime Minister Juan Antonio Briceño; Saint Kitts and Nevis Ambassador to Taiwan Jasmine Huggins, who is the dean of the diplomatic core in Taiwan; as well as other diplomatic allies and a few cultural performances.

Pitts suggested Belize may participate in a travel bubble with Taiwan similar to that of neighbouring Palau, stating, “The pandemic has forced us to think outside the box in terms of how we conduct our business, how we travel, and how we interact with other people.”

In terms of current areas of cooperation, the ambassador listed economic exchanges, legal assistance, education, agriculture, healthcare, infrastructural development, and aviation services as fields the two countries have worked together in. However, she remarked that both nations need to work more closely on business investment, and there needs to be more knowledge transfer from Taiwan to Belize with regard to agriculture and healthcare.

The ambassador also suggested there be more investment in outsourcing services, as it could benefit both countries and create more employment in the Caribbean nation.

Pitts also discussed her favorite things about Taiwan and recommended tourist getaways in Belize, concluding that as the Belizean ambassador to Taiwan, she hopes to further facilitate opportunities “that will help strengthen the cooperative efforts and the bond between the two countries.”