Belize Weather: Weather cools down with some showers countrywide 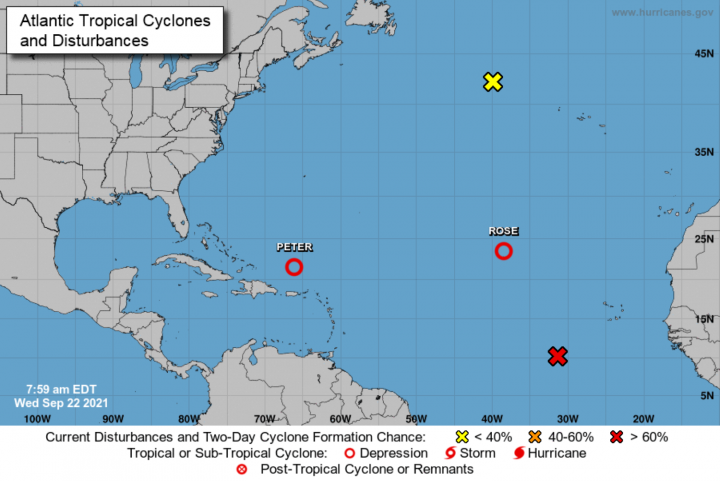 By Rubén Morales Iglesias: Tropical Depressions Peter and Rose in the mid-Atlantic do not represent much of a threat and are expected to dissipate later this week. Meanwhile, a tropical wave southwest of Cabo Verdes Islands could develop into a tropical storm later this week as well.

The United States National Hurricane Center (NHC) said in its 6 am advisory that Tropical Storm Peter was located about 215 miles north of San Juan, Puerto Rico, with maximum sustained winds of 35 miles per hour. Peter was moving northwest at 12 miles per hour. The center of Peter will continue

However, Peter could produce anywhere between 1 to 9 inches of rainfall across portions of the Virgin Islands, Puerto Rico, and northern portions of Hispaniola through Thursday morning. The NHC said this rainfall may lead to urban and small stream flooding.

Peter is expected to dissipate within the next 36 hours.

Tropical Storm Rose was very far away from land at about 1065 miles west-northwest of the Cabo Verdes Islands. At 6 am on Wednesday, Rose had maximum sustained winds of 35 miles per hour and was advancing to the northwest at a speed of 8 miles per hour.

The NHC said Rose, like Peter, is expected to break up with a day and a half.

Meanwhile, a tropical wave several hundred miles southwest of Cabo Verdes Islands has a 90% chance of developing during the next two days to five days.

The NHC forecasters said the tropical wave could become a tropical depression within a day or two as the system moves west at 10 to 15 mph across the eastern and central tropical Atlantic Ocean.

Additionally, the NHC said a gale-force, non-tropical low-pressure system, the remnants of Odette, just under 500 miles west-northwest of the Azores. The system has a 30% chance of formation within the next 48 hours and 50% within the next five days.