Get vaccinated against COVID-19 today in Dangriga 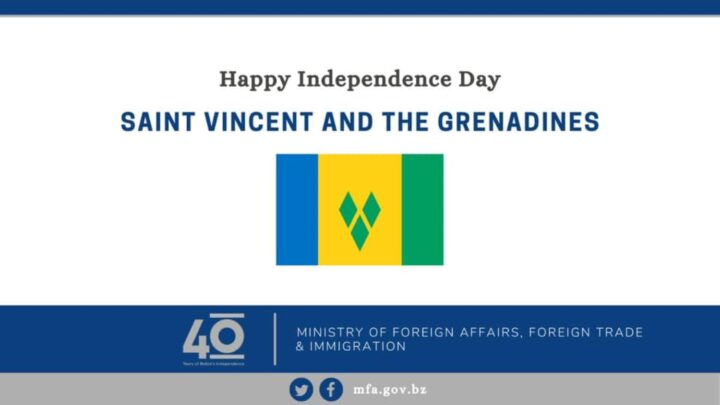 By Rubén Morales Iglesias: “Warmest congratulations and best wishes to the Government and People of Saint Vincent and the Grenadines on their 42nd Anniversary of Independence,” said the Belize Ministry of Foreign Affairs on its Facebook page on the occasion of the 42nd anniversary of the country’s independence on October 27.

The Caribbean island-nation is situated in the southeast Windward Islands of the Lesser Antilles. St. Vincent and the Grenadines have an area of 142 square miles and a population of 110,000. It is comprised of the island of St. Vincent and 32 islands that make up the Grenadines, the majority of which are not inhabited. Its capital is Kingstown.

The islands are next to Saint Lucia, Barbados, and Grenada.

St Vincent and the Grenadines is a member of the Organization of Eastern Caribbean States, and CARICOM.

It is home to the very active volcano La Soufrière which erupted in April and caused great damage to the country.

CARICOM’S Secretary-General Dr. Carla Barnett also congratulated the Government and people of St. Vincent saying that the resilience displayed by St. Vincent and the Grenadines in dealing with the recent traumatic volcanic eruption while having to confront the COVID-19 pandemic shows the strength of character of its people.