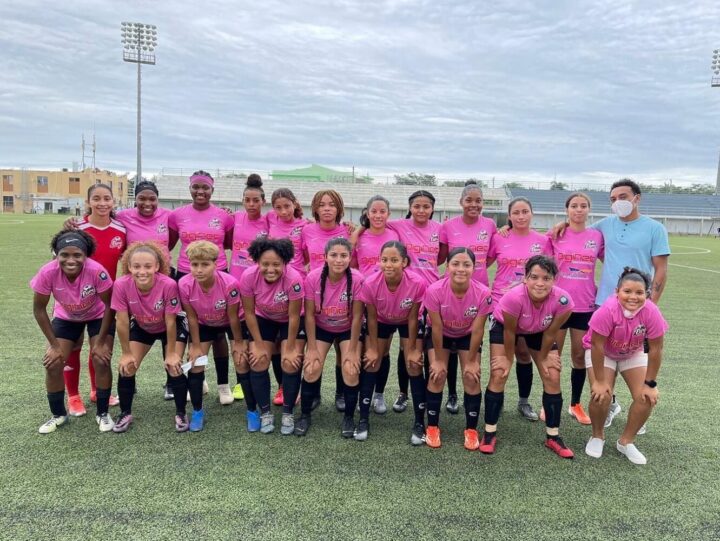 By Rubén Morales Iglesias: Jewel Fury bombed Sagitun Girlz 6-0 to finish the first round of the National Amateur Women’s League (NAWL) atop the South Zone standings with a perfect 15-points record qualifying to the semifinals.

Scoring leader Jayda Brown scored a hattrick converting in the 11th, 13th, and 71st minutes. Janivi Quiroz in the 23rd, Jesselle Conorque in the 44th, and Jenisha Scott in the 48th struck the other three goals for Jewel Fury on Sunday, December 5, at the FFB Stadium in Belmopan.

Rumberas captured the second spot on the 3-0 away win over Hyper Phoenix at the Victor Sanchez Stadium in Punta Gorda on Sunday. Kaite Jones powered a brace in the 63rd and 78th minutes after Shendra Casimiro’s opening goal in the 34th minute.

In the third NAWL South game of the weekend, visiting Kulcha United blanked Stann Creek United Hyper Jewels 4-0 at the Carl Ramos Stadium in Dangriga. Khalydia Velasquez nailed in two in the 69th and 76th minutes. Right after, Shayama Caliz pushed in the third in the 78th and Taryn Arnold secured the fourth in the 85th from the penalty spot.

Jewel Fury with 15 and Rumberas with 10 points qualified to the semifinals. The Sagitun Girlz were one point short with nine. Kulcha United totaled five points, the Hyper Jewels got three, and Hyper Phoenix finished with one.

Fury will play the North second-place San Pedro Pirates at the FFB Stadium on Saturday in the one-shot semifinals, while Rumberas will square off against the North winners Rebel Girls at the Norman Broaster Stadium in San Ignacio on Saturday as well. Both games play simultaneously at 3:00 pm.