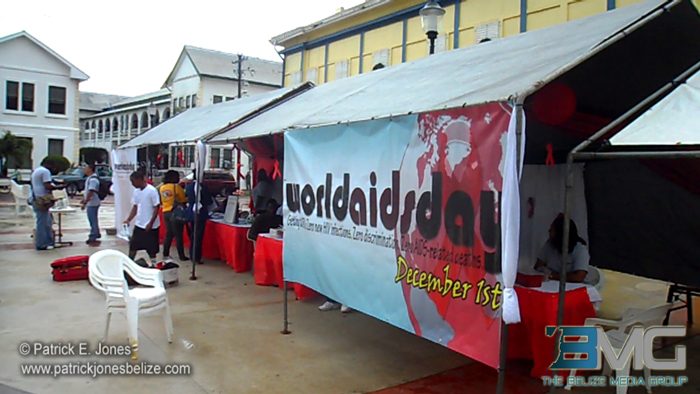 Monday, December 1, 2014. AARON HUMES Reporting: The human immuno-deficiency virus (HIV) has claimed hundreds of lives in Belize and is set to snuff out even more if current trends continue.

On this World AIDS Day, while all Belizeans were encouraged to know their status, the Ministry of Health, National AIDS Commission and other health partners pursued a specific goal: targeting men for vital information to get Belize to “zero.” According to the National AIDS Commission’s Communications Officer Arthur Usher, sexual contact remains the most common mode of transmission whether between males and females or males and males.

Women are more likely to get tested and receive treatment, especially if they are pregnant; this leaves a gap for men that needs addressing.

According to Usher they have gone out to workplaces to recruit clients for testing and today’s event was another method of outreach, since men are reluctant to go to any doctor let alone for something perceived as less than macho and embarrassing. VCT Coordinator for the Ministry of Health, Nurse Margaret Bradley, says the procedure for HIV testing emphasizes the importance of confidentiality.

While individual information and identification is taken these are kept under wraps to limit stigma and discrimination from those who would wish ill.

Counseling begins even before the test and continues whether positive or negative. As is proven by former basketball superstar Earvin “Magic” Johnson, who famously announced his infection in 1991 and later returned to play and coach in the NBA, HIV is no longer a death sentence if you take care of yourself and keep up with medication.

However the virus is strong enough to morph into Acquired Immune Deficiency Syndrome (AIDS) after a period of time and remains fatal, without a cure.

World AIDS Day is one of the flash points of the 16 Days of Activism which focuses on social issues ranging from gender and violence to human rights.