Tuesday, June 9th 2015. Chrisbert Garcia Reporting: Arrangements are currently being made for a Post Mortem examination to be conducted on the body of Hilberto Sotz who died in police custody yesterday, June 8th.  Two police officers are presently detained pending the outcome of investigation of this incident which prompted a riot in Caye Caulker village and the theft of a golf cart that was being used by police. Reports are that 18-year-old Sotz of Bahia Puesto Del Sol, Caye Caulker Village was detained at Caye Caulker police station pending investigation into a series of burglaries, when sometime around 5:00pm, while being interrogated, he started complaining of chest pain and had difficulty breathing.

He was rushed to the polyclinic for medical treatment where he passed away, causing concerned villagers to surround the clinic and throw missiles, minimally damaging the building in addition to stealing a $13,000 golf cart that was loaned to the police. The golf cart was recovered early this morning and additional police units were dispatched from San Pedro and Belize City to restore law and order around 11:00p.m. last night. This situation was resolved rather peacefully but the commissioner of police wants to remind us that while citizens have the right to assemble and protest, they do not have the right to destroy the property of others, be it public or private, nor restrict the movement of other citizens from conducting lawful business. 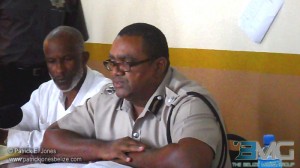 Senior investigators from Belize City as well as senior officers from the Professional Standards Branch have been dispatched and directed that a thorough investigation be launched to determine the circumstances leading to the detention and the passing of Mr. Hilberto Sotz, whose body now lies at Karl Heusner Memorial Hospital Morgue.

In the press release from which this information was derived from, the Belize Police Department extends its deepest condolences to the family and friends grieving the loss of Hilberto Sotz and assures the family as well as the citizenry that an expeditious, thorough and transparent criminal, as well as internal investigation is presently underway, and any evidence of wrong doing will be promptly dealt with.

The general public is encouraged to continue working in partnership with the police department in making our communities safer.