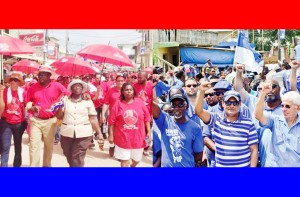 This election was largely unexpected – the administration of Prime Minister Dean Barrow was expected to last until 2017 and no more than a month before calling the election, the Prime Minister had stated that he was holding off until early next year.

The first week of campaigning was dominated by labour issues and the assembling of a third party – the Belize Progressive Party (BPP). Faculty of the University of Belize, workers of the Social Security Board and First Caribbean International Bank among others protested for Government to settle their disputes with their employers, on the heels of the settlement of the BTL/BEL impasse. So far none have managed to reach their objective.

Meanwhile, the BPP’s “Green Machine” gained steam, rustling up 25 candidates to run on the ballot in all six districts – by far the most for any non-major political party at a general election in Belizean history.

The non-political NGO Citizens Organized for Liberty through Action (COLA) announced its plans to lead an “Anyone But Elrington” campaign against the two-term Pickstock representative. It culminated in the nomination of 86 candidates at the polls.

The third week saw the launch of the major parties’ manifestos, with the PUP promising free education and 25,000 jobs in four years as well as comprehensive reforms to governance. The UDP touted its achievements and promised “the best is yet to come.”

It was preceded by an unexpected storm that caused massive flooding in Belize City and the North and the Government marshaled resources as they were criticized for improper planning.

The final week saw Guatemala return to prominence with the confirmation of Jimmy Morales as its new president; Prime Minister Barrow issued some “tough talk” to the new President, insisting that Belize would not be “bullied” into giving up territory but reiterating peaceful settlement.

Meanwhile, in an announcement some saw as interference, a leading British commander visited Belize and announced the British would return in the next year for a more established training presence.

Concerns of election fraud were also raised in the final weeks, with the PUP in constant back and forth with Chief Elections Officer Josephine Tamai.

But it’s all over now, and the people will finally have their say. Tomorrow, vote, and follow every result with BMG!