Beyond the Horizon donates new Clinic to Double Head Cabbage 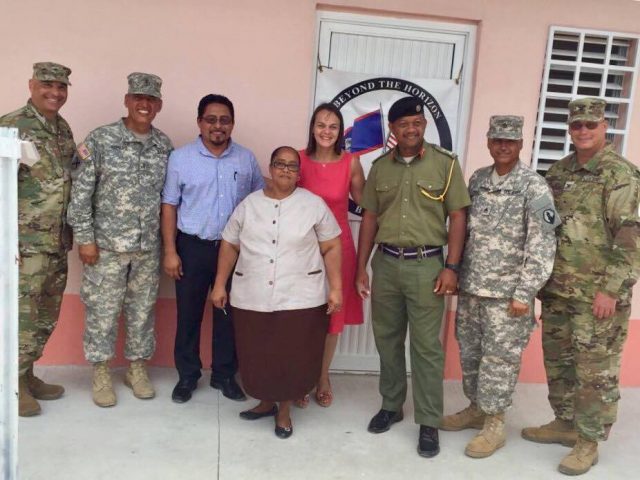 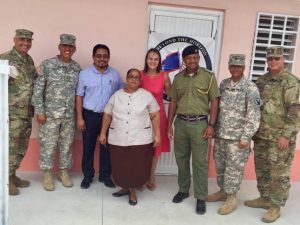 By BBN Staff: Yesterday, the U.S. Embassy and the Government of Belize, in coordination with U.S. Army South, held the fourth ribbon cutting ceremony as part of the Beyond the Horizon 2017 (BTH) collaborative humanitarian exercise.

The  U.S. Government officially handed over the keys to the new Double Head Cabbage Clinic to the Ministry of Health.

Students from the Belize Rural Primary School also participated in the ceremony by performing the Pledge to Belize and a short skit, highlighting what the new clinic means to the community.

The new 2,100 square foot Double Head Cabbage Health Center is the largest building completed during the BTH exercise.  This building replaces an existing structure that is no longer capable of meeting the community’s healthcare needs.

The new 11-room clinic includes a waiting room for almost 40 people, bathrooms equipped with hand railings for patients with special needs, a triage room, and three private consultation rooms, one of which has an additional private bathroom.  The building also includes space for a pharmacy with a dispensing window, a storage room, and a lounge area for staff members.

U.S. Service Men and Women from the National Guard and the reserve component of the U.S. Army, U.S. Marine Corps, and U.S. Air Force, hailing from the Commonwealth of Puerto Rico, Tennessee, Texas, Montana, Wisconsin, and Colorado participated in the project.  The specialists had the opportunity to train in their military occupations during six rotations of two-week long deployments.

Reservists from the 448th Engineer Battalion of Fort Buchanan in San Juan, Puerto Rico, provided the core management team, overseeing the entire project.  As the work on the other BTH sites neared completion, team members joined the Double Head Cabbage site to assist with the heavy workload of this project.

BTH is a collaborative training exercise between U.S. Army South, the Belize Defence Force (BDF), the Ministries of Defence, Health, and Education, as well as partner nations, such as Trinidad and Tobago and Colombia.

The project also includes numerous NGOs and private companies from the United States and Belize.

The total project is valued at USD $11.5 million, BTH furthers the U.S. Government’s continued commitment to the Government and people of Belize.  BTH enhances health and education infrastructure and provides free medical services across Belize.

The exercise consisted of five construction projects and three events offering free general medical and dental services across  Belize.  BTH started on March 25, 2017 and is scheduled to end today, June 15, 2017.