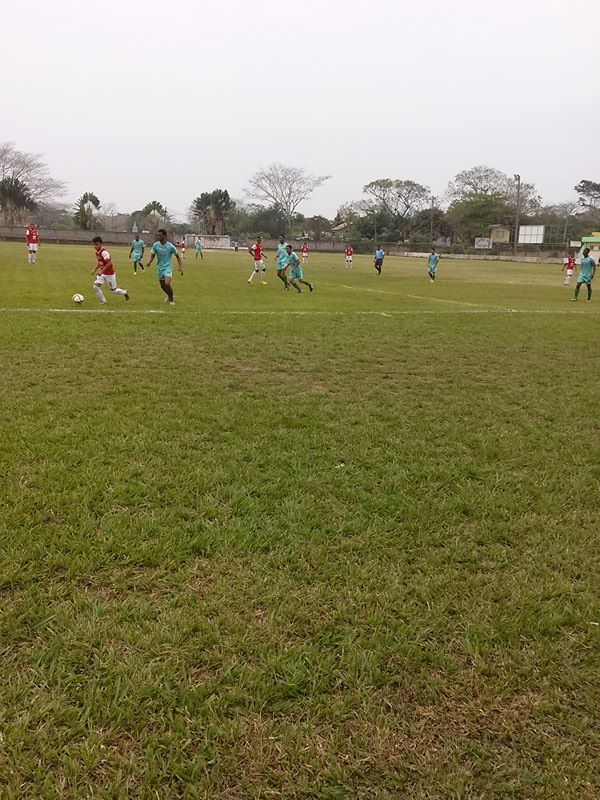 By BBN Staff: On Saturday night the second game of the Premier League of Belize’s (PLB’s) Closing Season semi-final playoff was held at the Isidoro Beaton Stadium in Belmopan. After a 2-2 draw last week the Belmopan Bandits hosted Police United in a very exciting game.

The Police team took the lead in the first half with a goal by Devon Makin which raised hopes for the team and their fans that their team is on their way to the finals. As the game was winding down in the second half, the Belmopan Bandits shocked Police with a goal by Jaro James. To the dismay of Police fans, the game ended in a 1-1 draw.

Belmopan Bandits, having scored 2 goals in the first match in their away game last week, ended with more points than the Police team and moves on to the finals. On Sunday, Verdes hosted the BDF FC at the Norman Broaster Stadium. After a 2 nil victory at home last weekend, BDF came with a game plan to dominate Verdes on their home turf.

However, BDF’s strategy did not go as planned because in the first 8 minutes of the game, Verdes’s Brazilian import, Alcides Thomas, scored the first goal. This put Verdes on a good start as they needed to win BDF FC by 3 goals to qualify for the finals.

Things got a bit physical later in the game and BDF was granted a penalty by referee Christopher Reid. Trimayne Harris took the penalty for BDF and scored. Moments after the referee interrupted the cheering of the BDF fans and cancelled the penalty and goal.

The cancellation of BDF’s goal from the penalty disturbed the BDF team and their fans. In the eyes of most spectators, including Verdes’s fans, the referee made a big mistake by not allowing the penalty to be taken over. This clearly affected the outcome of the game.

In the second half Verdes continued to dominate the ball game and goals were scored by Jarret Davis and Gilroy Thorton. After the long whistle Verdes and their fans celebrated as Verdes achieved the 3 goal margin needed to move on to the finals.

The Belmopan Bandits and Verdes will now meet again for the finals of the PLB Closing Season. Belize’s version of the El Clasico’ s first game comes up this Sunday, 6th May, at 4:00 pm at the Norman Broaster Stadium in San Ignacio.