Sister B to succeed PM Barrow in Queen Square 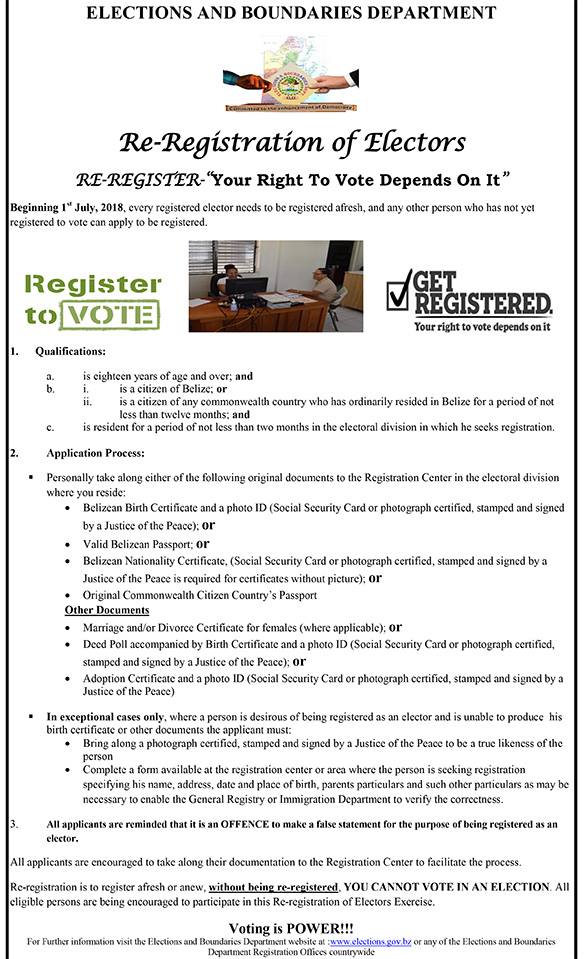 The Belize Elections and Boundaries Department released its list of official re-registration centers last week and guidelines for Belizeans to re-register.

The Belize National Elections and Boundaries offices had been preparing for the process in which every Belizean of voting age, must re-register to be able to participate in any referendum or election in Belize.

Belizeans who turned 18 years old must also register at their respective re-registration center.

Belize’s constitution requires that a re-registration exercise be conducted every 10 years, however, administrations for the past two decades have not honored the obligation.

The re-registration process is crucial especially with the upcoming national referendum to be held in Belize, in which Belizeans will be asked if they agree to take Guatemala’s long-standing dispute on Belize’s insular, maritime and continental territory to the International Court of Justice (ICJ).

If Belizeans vote ‘Yes’, the dispute for about half of Belize’s territory will be taken to the ICJ, and the decision will be final, so if either side is unhappy with the outcome, it cannot be appealed.

There has also been much concern about Guatemalan citizens being registered to vote in Belize and in the upcoming referendum as many Belizeans have pointed out that our constitution clearly states that any citizen of a country which does not recognize Belize’s territorial integrity or independence cannot be a legal citizen of the country.

The problem is compounded because Guatemala’s constitution makes provision that Guatemalans cannot renounce their citizenship and their children, even if not born in Guatemala, are still citizens of that country.

Neither of the political parties, however, have addressed this aspect of the issue.