Belize brings home silver and bronze from Taste of Caribbean 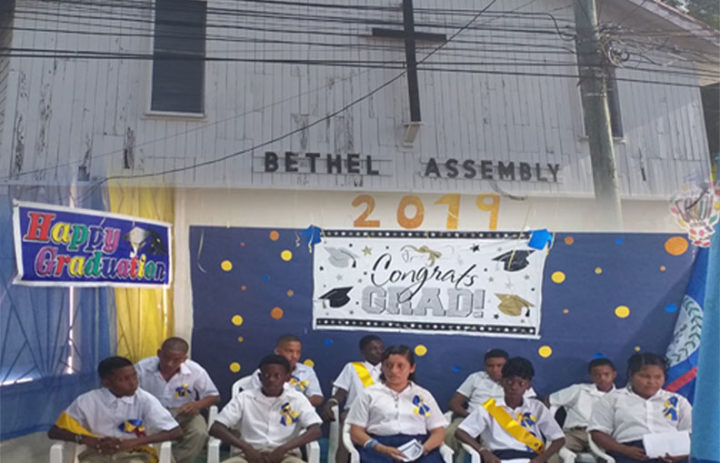 By BBN Staff: The month of June, when most graduations are held, is traditionally a time filled with joy and pride for students, teachers, and schools on a whole. But for Bethel Pentecostal Primary School in Belize City, the commencement exercise held today was bittersweet, because it will be the last in the school’s 64-year history. That’s because when Bethel closes its doors on Friday, June 28, they will close for good.

Ten students received their certificates of completion at the graduation, held on the school grounds on Free Town Road. The marched, listened to speeches, sang “The World’s Greatest” by R. Kelly for their graduation song, paid tribute to their parents, and bid each other farewell with the classic graduation song “Friends Forever” by Vitamin C. Following the graduation, parents and students stayed behind to share a meal together.

General Manager of Bethel Dr. Wilma Wright explained that, over the past ten years, the school population had rapidly declined. By the year 2014, the school had to switch to being multi-grade, to accommodate the loss of teachers and the small student population. Wright said that at the end of the 2017-2018 school year, the Ministry of Education, Youth, Sports, and Culture, (MOEYSC) asked them not to take on another Infant I class, which capped the student population for the 2018-2019 school year at 44 total.

“The Ministry has been good in facilitating the relocation of the students,” Wright said,” and agreed to pay their first year for whatever school they chose. We had a meeting with the Ministry and the parents in April and invited two schools, who have low enrollment, to speak with the parents.”

The school had three teachers and a teaching principal. Wright explained that the Ministry also assisted in relocating the teachers and that the principal, Raquel Moreno, was a retired teacher from Orange Walk who came in for the last school year.

Bethel opened in 1955 originally on North Front Street but moved to Free Town Road in the 1960s. Wright said that her father took on the role as General Manager following the move. She added that the resources was always a challenge for the school but she and her teachers did the best they could with what they had and that they are ending the school’s run “with grace.”