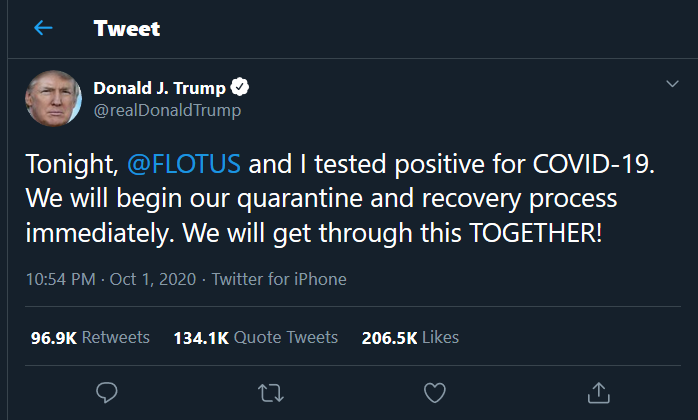 By Aaron Humes: A short while ago, U.S. President Donald Trump confirmed by tweet that he and First Lady, Melania Trump have tested positive for COVID-19. “We will begin our quarantine and recovery process immediately. We will get through this TOGETHER!” The President added in his announcement on Twitter.

Trump, 74, is coming off a largely poorly received debate with Democratic Party challenger Joe Biden in Cleveland, Ohio, on Tuesday as he seeks a second term in office.

Earlier tonight he announced that his chief aide Hope Hicks had tested positive for COVID-19 and that he and the First Lady had gone into quarantine, awaiting the results of their own tests.

The 31-year-old adviser to the president is the closest aide to Mr Trump to test positive so far, according to the BBC.

She travelled with him on Air Force One to the debate and was pictured getting off the presidential jet on Tuesday in Cleveland without a mask.

Trump mostly spurns mask-wearing and is often pictured not socially distanced with aides or others during official engagements.

According to Bloomberg News, Hicks is experiencing symptoms of the disease, and was quarantined on Air Force One on the trip back from a rally in Minnesota.

A White House official quoted by The Hill political news outlet said that contact tracing had been carried out “and the appropriate notifications and recommendations have been made”.

The coronavirus has infected more than 7.2 million Americans, and has killing more than 200,000 in the U. S. alone.