Police and Coast Guard working together to combat piracy activities 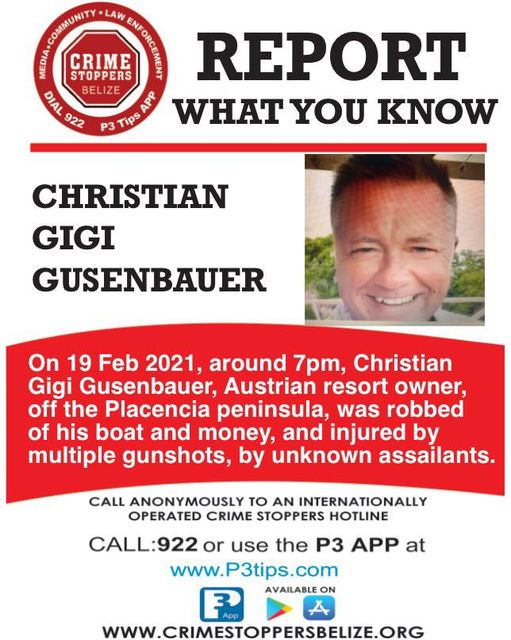 By Aaron Humes: Austrian retired resort owner, Christian Gusenbauer 46, of Private Heaven Resort, captivated social media on Friday night with his updates as he lived a nightmarish ordeal when thieves stormed his private residence, shot him multiple times, and stole his boat and a sum of money.

The official police report is somewhat more understated. It indicates that officers from the Placencia Peninsula arrived at Lark Caye Range, six miles east, around 8:20 p.m., about an hour after Gusenbauer and others sent out the alert.

Police carefully approached the unpainted, elevated wooden building and met Gusenbauer, who complained of pain to the buttocks as a result of a gunshot wound. Police said that they also observed that inside the house was ransacked.

Gusenbauer told police that he was set upon by three, perhaps four persons, dark-skinned and wearing hoodies, outside the house, though he is not sure of precisely how many. The men shot out the windows to get inside, as he locked himself in the bedroom. He then heard several more shots as he lay in shock. Ultimately, the men demanded money and he complied, whereupon one of them shot him before escaping in his boat, value unknown.

Gusenbauer told police that he was only staying in the house for the night.

Police transported Gusenbauer to Placencia to be treated by Dr. Alexis Caballero, then to Dangriga’s Southern Regional Hospital, though Gusenbauer wrote on social media this morning that he is presently being treated in Belize City and that he had been shot at at least 21 times. In any event, he is in stable condition and his wounds are not believed to be life-threatening. Police await the chance to record a statement but have issued medico-legal forms and have begun the search for the home invaders.