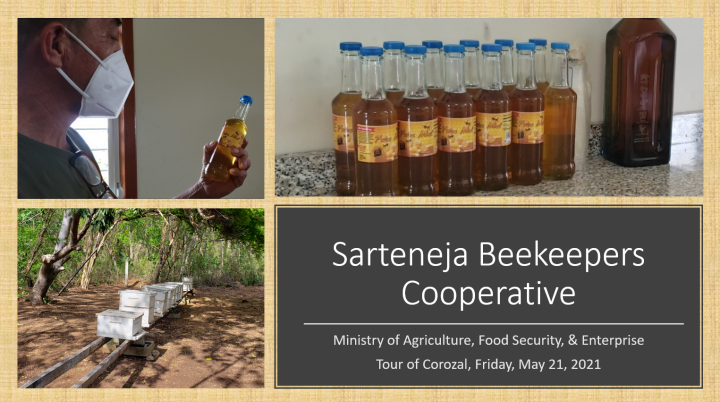 Campos said you can tell the honey produced by the Sarteneja Beekeepers Cooperative is of good quality because of its color.

Campos was in Sarteneja after spending the day guiding the agricultural tour of Corozal conducted on Friday, May 21, by the Ministry of Agriculture, Food Security and Enterprise (MAFSE).

Minister Jose Abelardo Mai and the MAFSE staff visited cooperative chairman Antonio Perez and members of the Sarteneja Beekeeper Cooperative to see their work. They visited the beehives which are in a forested area and the storage unit which is housed in an elevated wooden building within the village.

Perez said production is going well despite being affected by a beetle and added that they want to expand.

At this moment there are concentrating on honey production which they sell in bottles labeled ‘Pura Miel’ and are venturing into wine production as well.

Perez said that apart from selling their honey in Corozal, they sell it in Orange Walk. But the objective of the Sarteneja Beekeepers Cooperative, he said, is selling their product throughout the entire country. However, at this point they run out of honey by December, so they don’t have enough to supply the local demand.

The honey harvest starts in February and runs until May said Extension Officer Miguel Huertas, though places like Sarteneja who start producing later extend into June.

Perez also spoke about the difference between their honey and Orange Walks. He said Orange Walk is mostly a sugar cane honey, while theirs is based on flowers such as mangroves and mangoes that grow in the area.

Perez also said their honey does not crystallize.

Their hope is to improve the amount and quality of honey they produce and to that end, they intend to close off the downstairs of their wooden building and improve their production facilities.

But apart from making those improvements, Perez said they have to deal with the beetles which have become their main problem and have caused them to lose up to 35% of their beehives.

“The beetle has been a headache for us because the beetle eats the honey, the pollen, and even the bees’ larvae,” Perez said. “When it rains it gets worst.”