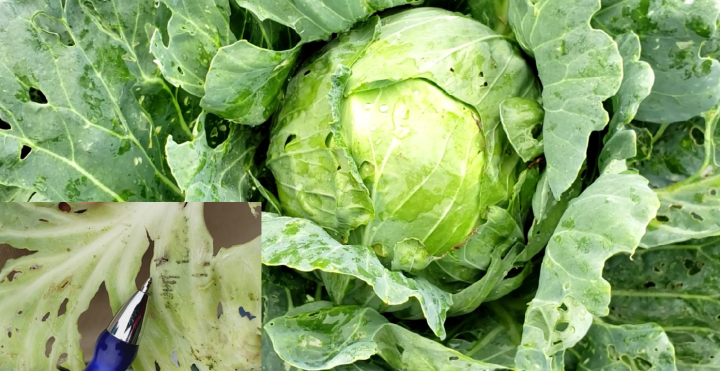 By Rubén Morales Iglesias: The cabbage production in the country is affected by a small little monster called the Diamond Back Moth, but the farmers are fighting back to control it and have quality cabbage for the Belizean consumer.

The diamondback moth (Plutella xylostella) is a lepidopteran insect that attacks crops such as cabbage, broccoli, and cauliflower.

The diamondback moth is a small, greyish-brown, night-flying moth that gets it name because when it is resting a pattern of three diamond-shaped spots appears on its back. According to Wisconsin Horticulture, the moth lays larvae (caterpillars) that are up to up to 3∕8 inches long at maturity and are cabbage green to yellow in color. When disturbed, larvae rapidly wiggle their bodies back and forth, often causing them to fall off plants which are why irrigation using the Wobbler system is very effective.

Diamondback Moth larvae feed on the cabbage leaves between the large veins and midribs and cause holes on the leaves to the point that if the damage is extensive, it can stunt cabbage heads.

Farmers in Belize prefer to plant cabbage during the rainy season because the rain helps control pests such as the Diamondback Moth naturally, but farmers in Cayo, Orange Walk, and Corozal have been planting cabbage anyway.

During the Ministry of Agriculture Tour of Belize, we came across cabbage fields in Valle de Paz which seem not to be affected by that type of pest, but in San Carlos in Orange Walk and Concepcion in Corozal, we saw the level of damage that the Diamondback Moth caterpillars were having on the cabbage production.

At a farm in Concepcion, Corozal, owned by Orlando Ek of the Concepcion Vegetable Farmers Group where a substantial amount of Tropicana cabbage was planted, the outer leaves had been attacked by the larvae and were riddled with holes. The heads, however, were in very good shape due to the controls implemented by Ek.

“Excellent, excellent taste,” said MAFSE’s Project Coordinator and Program Coordinator for Grains and Traditional Export Crops Jose Novelo, who cut and tasted one of the cabbages. “Not even peppery because it’s getting enough water.

Novelo, who is an entomologist, said that if the caterpillars bore the inner core, the worms create holes and putrefaction, which will make the consumers reject the product.

Farmers have to control the pest by spraying biological inorganic products using the Wobbler irrigation system which sprays uniformly drowning the adult moth according to irrigation technician Alberto Gutierrez.

“The issue that we’re dealing with, you can see it. You can see the level of damage in the crop,” said Gary Ramirez, Coordinator of the Horticulture Unit in the Ministry of Agriculture, Food Security and Enterprise at a farm of Concepcion Vegetable Farmers Group in Concepcion, Corozal.

“Diamondback Moths fly predominantly at night and so during the course of the day they spend most of its time within the head or the top of the soil,” he said while holding a piece of a cabbage leaf which had lots of holes.

“Looking at this cabbage field and looking at the scale of the damage, and the Minister was making the point that you don’t, outside of Cayo District, you don’t see large scale cabbage production in the dry season and this is the biggest reason why.

“You look at the damage, the rate of damage, and obviously each hole that is on this plant is reducing its ability to photosynthesize properly, produce its own food to develop,” Ramirez said. “The main culprit here is this guy which is a Diamondback Moth. But this doesn’t do the damage, this is just the adult. What actually does the damage is this guy, the larvae.”

“What the moth does is establish itself within the confines of the crop and once the larvae are hatched, then the larvae have something to feed on. Every single hole that you see here is actually created by the larvae.

“So, what it does is that the cabbage needs to form a head and if the leaves are consistently being damaged like this, it does not go through that process.”

Ramirez said that the farmer would lose his crop or part of it if he doesn’t manage it well during the different stages of cabbage growth.

And the farmers cannot afford to lose their crops, after all the New River Farmers in San Carlos cultivated 210,000 pounds of cabbage from seven acres while the Concepcion Vegetable Farmers cultivated 130,000 pounds on six acres in the 2020-2021 season.

So, they are making sure they control the Diamondback Moth.

“There are beneficial insects which would be the best way to deal with it. But you also have products on the market such as BT (Bacillus thuringiensis) for example, which is less toxic, and when you spray it, [since] it’s actually a bacteria, it consumes the larvae from within, from its stomach, destroying it, which then reduces the level of damage.”

“This is every season for cabbage in Belize because of our climate. So, most farmers tend to stay away from the dry season. Thereby you see prices being higher on the market and when June starts and the rain starts, farmers will go into production thereby trying to avoid this entire scenario,” Ramirez said.

Looking at the cabbage field, Ramirez said that the farmers in Concepcion were taking the right measures.

“It has holes, but the farmer has been able to do some management and it has basically grown beyond that critical point to actually form a head. So, you’re looking at maybe a pound and a half or two-pound head. It still has a little ways to go, but if you check it, it does have a little bit of damage inside, but it’s compact, which means it’s growing well.”

Ramirez said that the farmers have to continue managing their crop until its harvest time.

“The farmer just needs to do a little more work. The crop still has a little more time and then it will be ready for market. Some people prefer to buy it like this because these are indications that the farmer was not dumping a whole lot of pesticide on the crop, so it’s still good quality food,” Ramirez concluded.