Restaurant owner charged for allowing patrons inside his business without a mask; says they were eating 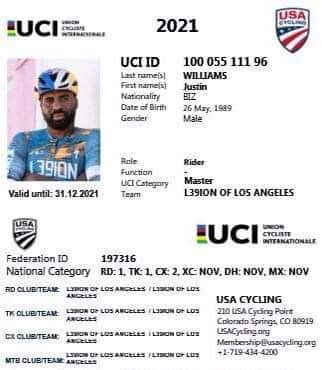 “We are honored to officially announce that Mr. Justin Williams has completed the process of nationality change with the relevant authorities namely the UCI (Union Cycliste Internationale) and USA Cycling,” said the CFB.

“Mr. Williams has obtained an international license issued by his membership federation USA Cycling with a Belizean Nationality.”

Williams, the son of Belizean Calman Williams who migrated to Los Angeles but yearly made the trek back home to ride the Holy Saturday Cross Country, has won the Holy Saturday race twice, in 2015 and 2018, but because his international affiliation was under his US nationality, he didn’t qualify to represent Belize internationally.

“Mr. Williams is now eligible to compete in our National Championships and for selection to our National Team to represent Belize in international events,” added the CFB.

After riding professionally for US teams both in the US and Europe, Williams founded his own team L39ION in Los Angeles, California. He continues riding at the pro level in the United States along with brother Cory who has also competed in the Holy Saturday Cross Country.

Williams has won 11 US National Championships.

Apart from racing in the United States, he has competed in the races in Canada, Lebanon, and the Tours of Qatar, Oman and Uruguay.

On Friday, June 11, Williams won the Tulsa Tough race in Tulsa Oklahoma, leading his team L39ION (pronounced Legion), which is one of the US national criterium races.

The Wall Street Journal on June 12 referred to Williams as a “a 32-year-old Black cyclist and team owner from Los Angeles trying to widen Black ridership and diversify a predominantly white sport.”