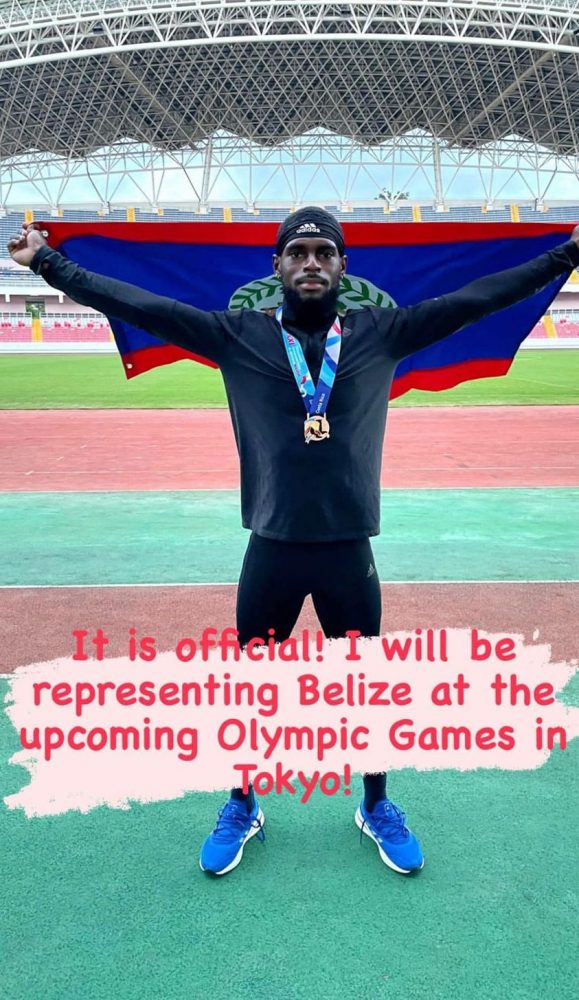 By Rubén Morales Iglesias: 100m athlete Shaun Gill will be going to the Tokyo Olympics next month, according to the Belize Athletics Association (BAA), but Belize’s other hopeful, Samantha Dirks, is waiting on word from the International Olympic Committee and World Athletics.

“There was a mix-up, but in the male we have made the selection for Shaun,” said BAA president Deon Sutherland confirming that Gill is headed to Tokyo next month to represent Belize in the 100m.

The BAA reportedly recommended Samantha Dirks for the 200m and Shaun Gill for the 100m to the International Olympic Committee for consideration for Universality Places (UP) once no Belizean athlete qualified directly to the Olympics.

Sutherland said that he had been unofficially informed that the International Olympic Committee had given a UP to Dirks, but when the notification came from World Athletics, the world governing body for athletics, the spot was for 100m men’s or women’s, so the spot was given to Gill because he is Belize’s best 100m runner, his personal best being 10.55 seconds.

Since Dirks’ specialties are the 200m and the 400m, the BAA had recommended her for the 200m because she has the closest to the qualifying times set by World Athletics.

Sutherland said the BAA immediately re-applied on Dirks’ behalf and is now awaiting a decision.

“Every country that does not have a qualified athlete gets a UP,” said Sutherland.

When no one qualifies directly, the International Olympic Committee has normally invited two athletes from each country, one man, one woman, under the Universality Places.

The final day for Olympic qualifying was June 29 and a final decision of who makes the list should be announced on Thursday, June 30.

The BAA is hopeful Dirks will be included.

Both Gill and Dirks were among four Belizean athletes who were on Olympic Solidarity Scholarships since 2018. The other two were Mark Anderson and Hilary Gladden. According to Sutherland, Olympic Solidarity funded them to train to help them qualify to the Olympics.