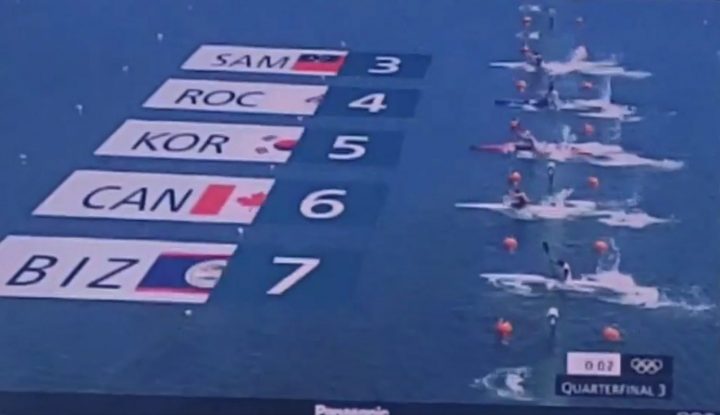 By Rubén Morales Iglesias: Amado Cruz was faster by 0.307 of a second in the quarterfinals of the Canoe Sprint – Kayak Single 200m Heat 3 at the Sea Forest Waterway in the Tokyo 2020 Olympics.

“Amado Cruz has completed all four of his races here at the 2020 Tokyo Olympics. He has made us all proud and represented Belize well in all four races,” said the Belize Canoe Association on Facebook.

“He paddled against the best of the world. He is an Olympian at heart. Great job Amado.”

The winner of the quarterfinal heat was Gwanghee Cho of South Korea who clocked 35.048 seconds. Cho and Canadian Nicholas Matveev (35.181) qualified for the semifinals.

The winner of the first round heat was Strhinja Stefanovic of Serbia in 34.996. He and second-place Rubén Rezola of Argentina (35.059) qualified to the semifinals directly.

Cruz and the other two had another shot at the semifinals by competing in the quarterfinals tonight.

For Amado, who is Belize’s first paddler to ever compete at an Olympic Games, his participation is now over and it’s time to come home after four races, the most events any Belizean has competed in at the Games.

But, before he takes a plane back, he’ll be Belize’s flag bearer at the Closing Ceremony on August 8.

Before tonight’s race, Cruz had already competed in the Men’s Kayak Single 1000m on Sunday evening (Monday morning in Japan).

He clocked 4 minutes, 13.080 seconds finishing in the 5th position in the preliminary sprint at the Tokyo 2020 Olympics.

Then, in the quarterfinals the same night, Cruz crossed the finish line in 4 minutes, 15.262 seconds in the 6th position.

Belize also had participation in Athletics from Shaun Gill in the 100m and Samantha Dirks in the 400m.

Gill left Japan on August 3 while Dirks leaves on August 7. Though they will not be in Tokyo for the closing they must have the satisfaction of having been Belize’s flag bearers at the Opening Ceremony.