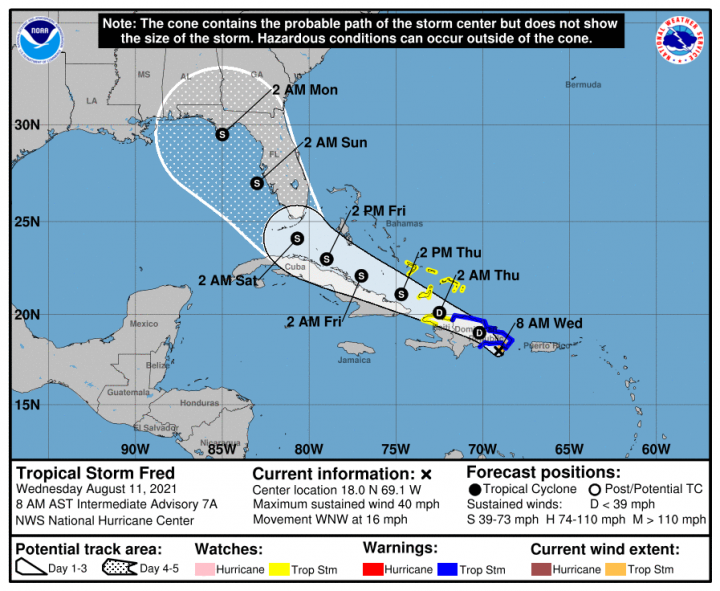 By Rubén Morales Iglesias: The United States National Hurricane Center (NHC) says Tropical Storm Fred is passing over the Dominican Republic on Wednesday morning and over Haiti and the Bahamas later in the day.

At 6 am on Wednesday, August 11, Tropical Cyclone Six had sustained winds of 40 miles per hour, was located at 18.0 North and 69.1 West, and is moving west-northwest at 16 miles per hour.

The NHC said tropical storm conditions should affect parts of the Dominican Republic on Wednesday morning and northern Haiti and the southeastern Bahamas by late Wednesday.

The NHC also advised that heavy rainfall can cause flash, urban, and small stream flooding and potential mudslides in those areas. The NHC added that the greatest threat of flooding would be in eastern and southern Puerto Rico.

Hispaniola, the Bahamas, and Cuba should expect wind and rainfall impacts during the next few days but said the forecast is more uncertain as Fred interacts with Hispaniola today.

Florida should also be affected by wind and rain by Friday and the weekend. 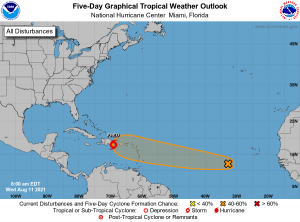 At the same time, the NHC is following a tropical wave over the eastern tropical Atlantic which is causing disorganized showers and thunderstorms located several hundred miles west-southwest of the Cabo Verdes Islands. The system may develop gradually and could become a tropical depression by early next week though it may reach the Leeward Islands by late Saturday.